Hey its Thursday again. The first outing went well and so its time for round two.

This week's Thursday Movie Picks is Movies with an Ensemble Cast. 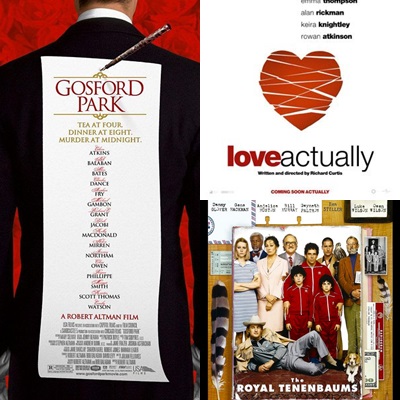 1) Gosford Park (2001) - " Multiple storylined drama set in 1932, showing the lives of upstairs guest and downstairs servants at a party in a country house in England."
Starring:  Maggie Smith, Michael Gambon, Kristin Scott Thomas, Charles Dance, Tom Hollander, Jeremy Northam , Ryan Phillippe, Kelly Macdonald, Clive Owen, Helen Mirren, Eileen Atkins, Stephen Fry, Emily Watson, Alan Bates, Derek Jacobi, Richard E. Grant, Bob Balaban
Ok did I miss anyone? The cast here is huge! It is amazing they got all these people for this movie. I first saw it when it was first released on DVD and I did not get it at all. A few years later I decided to give this movie a second try and I loved it. You just have to pay attention to every snarky, gossipy, well meaning, heart wrenching conversation and there are lots of them and there's soo many characters to follow but all their little storylines fit together so well. If you love Downton Abbey Season 1, you will love this because it's just a better put together story with all the soap operaish drama taken out and a little murder mystery in its place. By the way, Julian Fellows writer/creator of Downton Abbey wrote the screenplay for Gosford Park based on the ideas of Robert Altman and Bob Balaban.

2) Love Actually (2003) - "Follows the lives of eight very different couples in dealing with their love lives in various loosely interrelated tales all set during a frantic month before Christmas in London, England."
Starring: Bill Nighy, Colin Firth, Liam Neeson, Emma Thompson, Martin Freeman, Andrew Lincoln, Keira Knightley, Hugh Grant, Laura Linney, Alan Rickman...
The best thing about this movie is that it doesn't just explore romantic relationships, it actually features relationships between friends, siblings and parents and their children which is good on them for attempting to give a more realistic picture of the different type of love out there. Despite Love Actually being an overall warm fuzzy feel good flick, not every character have their happily-ever-after which is another thumbs up from me. Not that these characters are miserable miserable, but I guess they just have to choose which bubble of happiness they want to protect more.

3) The Royal Tenenbaums (2001) - "An estranged family of former child prodigies reunites when their father announces he is terminally ill."
Starring: Gene Hackman, Gwyneth Paltrow, Anjelica Huston, Ben Stiller, Luke Wilson, Owen Wilson, Bill Murray, Danny Glover, Alec Baldwin
This is my favourite Wes Anderson movie. I just love this quirky tale of a dysfunctional family of geniuses. Its both wonderfully funny and sad and I really like the story book manner the story is told. And have you seen the Criterion DVD of this? It's packaged like a storybook and also there's even the covers of the fictional books/magazines that the Tenenbaums had wrote or were on the cover off. Now I want that Criterion set especially since it's been a long time since I've seen the movie.