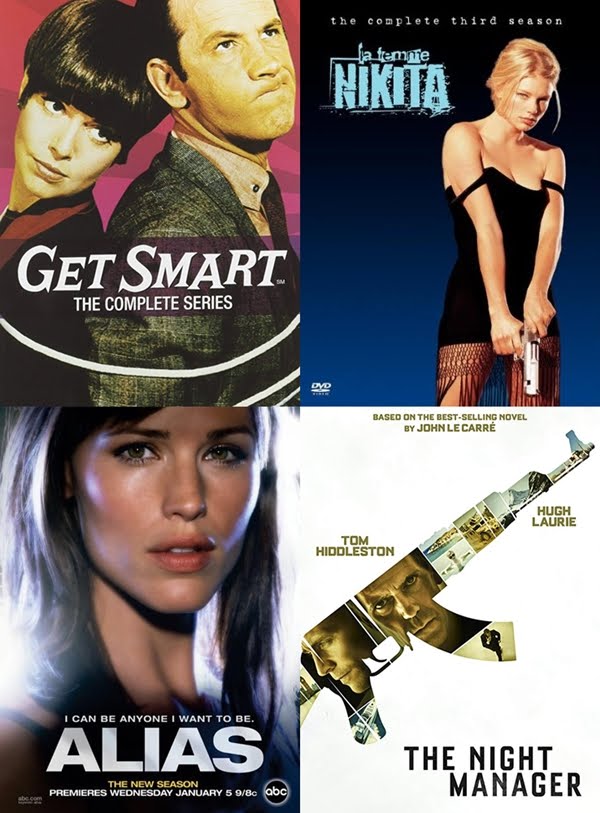 I'm going totally random with just series I have seen over the years.


Get Smart (1965 - 1970)
When I was growing up, a lot of classic American TV series were shown in the daytime so I ended up watching quite a number of them after school including Get Smart. I don't remember much of it now except, that main male character isn't that smart and his shoe is a phone.

La Femme Nikita (1997 - 2001)
I have not seen this in ages and hardly remember it now beyond the basic premise, but it had been one of those TV shows that I stayed up to watch as a kid. I tried to watch the new Nikita with Maggie Q, I only manage a couple of episodes. I think I prefer this 1997 version.

Alias (2001 - 2006)
The other lady spy series. Very action packed and thrilling. Jennifer Garner was just awesome as Sydney Bristow and of course the disguises are always part of the fun of a spy series. And remember Vaughn, Sydney's handler? Was he not totally crush-worthy.

The Night Manager  (2016 - )
I had been looking forward to this because it was so well received and people were saying that Tom Hiddleston could be great as the new Bond because of it. So anyway...the series is ok and it was shot in very beautiful locations but I didn't find it too thrilling and suspenseful. And...I didn't like Hiddleston in it, he seemed quite awkward.

This week's theme is by Wendell. I decided to go for lighter picks instead of serious dramas.


Home Alone (1990)
How do you leave your 8 year old at home alone? I understand that it the chaos to get to the airport it is possible he got left behind. But who was holding on to the kid's passport and ticket, that they only realize he was not with them when they are all on the plane flying to wherever?

The Parent Trap (1998)
Not telling your children that they have a sibling, especially a twin is pretty terrible.

The Bling Ring (2013)
I think it was Leslie Mann's character who I think was Emma Watson's character's mom...wants so much to be the cool hip mom she lets her bratty daughter get away with everything.

Thursday Movie Picks #209: Characters Magically Aging Up or Down

I thought there were going to be more of such movies...oh well I guess I was wrong. I think the Body Switch theme in August would be more interesting with a lot more movies to pick from.


17 Again (2009)
Guy regrets the path not taken. When his wish to be 17 again is granted he enrolls back in the same high school his kids are giving him an opportunity to have a relationship with his family from a different perspective. Really enjoyed this, very funny.


13 Going on 30 (2004)
Girl wishes to skip the awkwardness of adolescent straight to being 30 and her wish is granted. I enjoyed the whole 80s thing and the movie overall is just super cute.

Big (1988)
Boy wishes to be big. His wish is granted and becomes an adult. The most popular one in this category. This used to be on TV a lot when I was growing up.

You know when you watch a good movie and think there should be a sequel and you wait and you wait...well this is a theme inspired by The Incredibles and its sequel which only took 14 years to arrive.


Before Midnight (2013)
Before Sunset is my favourite, but I had not known there was going to be a continuation to Before Sunrise, I mean how often have dramas get sequels? So yeah I had not been waiting for a sequel after before Sunrise. However, after Before Sunset, of course! Only took 9 years to get Midnight...but that was expected since the gap between Sunrise and Sunset was also 9 years.


Toy Story 3 (2010)
Since Toy Story 2 came only four years after the first one, this seemed like it was a maybe...maybe not going to happen? But it did!..only took 11 years! Toy Story 4 is coming out next year, no plot details as yet, but let me guess...Andy now has his own place, and his childhood toys are now on display in glass cases as collectibles?

Star Wars: Episode VII - The Force Awakens (2015)
I suppose when new Star Wars movies were announced in the 90's, most fans probably wanted a sequel. Well we eventually got the sequel. Only took 32 years to happen.