This week's Thursday Movie Picks is Movies set in a Mental Institution.

This week I'm doing it a little different. I'm picking one for each...favourites, hidden gem and worst. 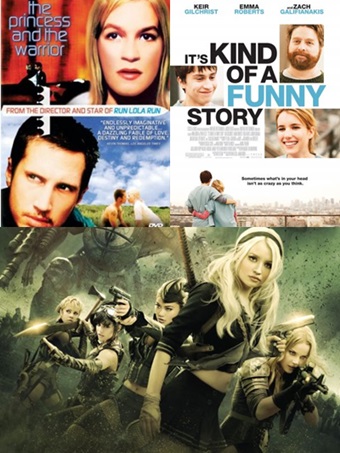 The Princess and the Warrior (2000) - " Young nurse Sissi lives a secluded life, seemingly entirely devoted to her patients at Birkenhof asylum. Her first encounter with ex-soldier and drifter Bodo has a lasting impact."
Run Lola Run may be the more famous Tom Tykwer movie, but the Princess and the Warrior is my favorite. No heart pumping action here. It's a quieter film with an unconventional love story about two people who meet as a result of a car accident; one a socially awkward nurse at an asylum and the other completely unwilling to enter any sort of relationship as he struggles to cope with the aftermath of a traumatic event in his past. I really like the characters here; complex and carrying a lot of baggage.

It's Kind of a Funny Story (2010)  - "A clinically depressed teenager gets a new start after he checks himself into an adult psychiatric ward."
I watched this a long while ago. I was quite surprised that everyone else didn't seem to like it (Tomatometer is 58%) because I actually enjoyed it. I thought it was quite a funny and moving story about a kid trying to deal with depression and just simply growing up. The concept of someone voluntarily checking himself into a psych ward just fascinated me. The movie is actually based on a book of the same name written by Ned Vizzini who wrote it based on some of his experience in psychiatric ward in his youth. The author committed suicide last year.

Sucker Punch (2011) - " A young girl is institutionalized by her abusive stepfather. Retreating to an alternative reality as a coping strategy, she envisions a plan which will help her escape from the mental facility"
I really enjoyed Zack Snyder's previous movies, Dawn of the Dead and 300 and so I was looking to be entertained by Sucker Punch. Plus this was an original screenplay unlike the others and I love stories about characters retreating to fantastical world in order to escape the cruel realities of their own world. Unfortunately  Sucker Punch was just terrible. The alternative reality is basically like a gamer boy's steampunkish/video game fantasy. It fails to bring anything other than being an excuse to put the girls in skimpy video gamey costumes and I think it really lost its audiences on caring what was happening to the characters in their real life.