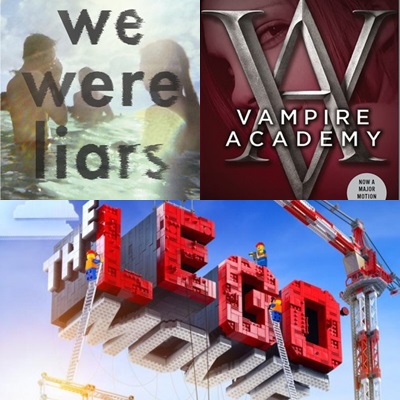 We Were Liars by E. Lockhart

I was looking forward to reading this not only because of the positive buzz but also because I love E. Lockhart's previous book, The Disputable History of Frankie Landau Banks. Most of the reviews for We Were Liars, well I only glanced at most of them (since I was worried about spoilers), mentioned how the book was great and that it's best if you know as little as possible coming into the book and that the ending is supposedly amazing. So there. I wanted it to be great

Then I read it.

Did I read the same book as everyone else. It was underwhelming.Cady the main character was just flat. She just lost part of her memory, as the reader we're suppose to feel something for her lost, despair but that just didn't come across for me.  So is the big reveal/ending awesome? Not for me since I guessed it halfway. I think if you've read/watched similar type of stories, you'd guessed what happens to the liars. As such, it kinda felt like the story was just dragged out for me.

Finally started on this. Only like a fifth through. Guess what? Not bad. It certainly starts off a lot better than the movie.

The movie looked cute and funny in the promos. So even though I'm not into animation (wait is this animation or stop motion?) I gave the Lego Movie a try. However beyond the initial novelty of seeing all the lego and all the popular characters on the screen, I couldn't care for the story. Seriously I was bored and the only reason I watched till the end is that I almost always try to complete whatever movie I watch. One thing I did enjoy was the brainwashy Everything is Awesome song.

Tuesday I did Broke and Bookish Top Ten Tuesday meme where I picked 5 book characters I wanted with me on a deserted island. My picks of Katniss and Finnick were extremely popular among other book bloggers as well.
Thursday was the second Thursday Movie Picks post and the topic was Movies with an Ensemble Cast. My picks were, Gosford Park, Love Actually and The Royal Tenenbaums. Next week's topic is Movies set in a Mental Institution.
Sunday, which is today, I've just added more topics for future Thursday Movie Picks Meme. Please go to the meme page for all the future topics.

I've also found a tumblr blog which I made along with this blog last year. But somehow I had totally forgotten about the tumblr blog until now. Have you checked out tumblr before. It's a great place to immerse yourself in book,movie,tv fandom. Here's the link to mine where I have reblogged a few posts.