This week the theme is not bookish as it's "Let's talk about other types of stories. Either Top Ten Favorite Movies or TV Shows". Because I'm starting my own movie meme Thursday Movie Picks this Thursday (which you can find about more here), for this week's Top Ten Tuesday I will list out the Top 10 TV Series I am currently following.

I am not really current in terms of the hottest shows that are out there or in terms of the seasons of the shows that I follow since we have yet to get some shows (eg Orange is the New Black) or even if we do get some of the US/UK series, we get them a season or two late. Thus I will also mention where I am now with the series below as I'm fearful of spoilers from episodes/seasons I have not watched appearing in the comments. 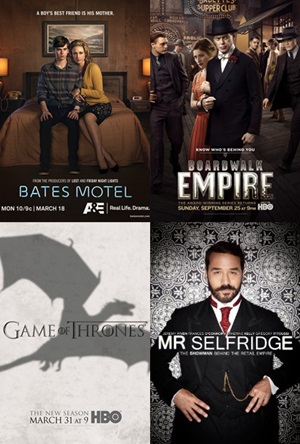 Bates Motel - Completed Season 1
Interesting that they decided to set in present day, which I think ups the complexity in terms of hiding Norman's unstableness and it works because it is a messy business. I thought everyone's perfect in their roles. Vera Farmiga as Norman's rather smothering mother (you'd wonder if she contributed to Norman's condition) and Freddie Highmore as Norman who is clearly off.

Boardwalk Empire - Completed Season 2
I gave this series a watch without knowing what it was really about as I like watching period drama. And I like. Good gritty drama about the corrupt politicians and the mobsters they do business with in 1920s Atlantic City.

Game of Thrones - Season 3 Episode 8
One of the best shows around. Great cast, great drama, beautiful location/sets...you believe this world where seven noble families battle for control over exists. So much conflict, backstabbing occurs, you never know which alliance overrides which alliance and who will survive.

Mr Selfridge - Completed Season 1
I'm a fan of period dramas. There's not many period TV series and this is one of the quality ones. There was a similar series revolving around a department store called The Paradise released around the same time, but I thought Mr Selfridge was far superior. It had better sets, costumes and story and I really enjoyed seeing the inner workings of a department store in that period of time especially since the concept of a department store was so new then. I also though the couples in Mr Selfridge were certainly better casted and had very good chemistry.

The Newsroom - Completed Season 1
Some of the episodes are a little self important. They were trying too hard to drive how important news is and how this fictional news station was trying to be The ethical news station. Other than that...it is an Aaron Sorkin show, so I enjoy the banter and verbal fights his characters often get into.

Once Upon a Time - Currently at Season 3 Episode 6
I didn't even like the first few episodes of this series and the green screen used to really take me out of the story in the beginning. But I stuck through it and I think binge watching season 1 on DVD pays off. There's tons of good episodes and since ABC is Disney, it's fun seeing all the Disney characters appearing in them. A few of the the Frozen characters are already set to appear in season 4.

Orphan Black - Currently at Season 2 Episode 2
This show is a surprise. I had read/heard this show being mention on blogs/podcasts but never really knowing what it's about. Anyway it's awesome. So is the main actress, who plays several different characters and you'll have no problem believing her as all those different character.

Revenge -Completed Season 2
Such a soap operaish show where everyone is rich, looks perfect with plenty of scandal and backstabbing. Still I find it highly entertaining and when/how will it all unravel?

The Vampire Diaries - Completed Season 4
I love this show! It started out as this teen vampire series, with the typical high school drama and the whole keep the Vampire thing a secret, but it got better and better as it went along. And it has such great villains...like Klaus...unfortunately he has moved to The Originals a show I'm not enjoying as much. Then there's Damon, the antihero as ever, my favourite Salvatore brother.

The Walking Dead - Completed Season 3
Amazing how there's a zombie tv series. I love the look of the show and how high the stakes always are. I'd like to check out the graphic novel someday too.

Email ThisBlogThis!Share to TwitterShare to FacebookShare to Pinterest
Labels: TV