Top Ten Tuesday #3: Top Ten Books I'd Give To Readers Who Have Never Read YA

This week's topic is Top Ten Books I'd Give To Readers Who Have Never Read ___. Since I've been reading more YA novels the past year or so the blanks will be YA. I know some people refuse to read YA because it is thought to be juvenile, but a lot of these books now are really pushing the boundaries of what you think a YA novel should be. 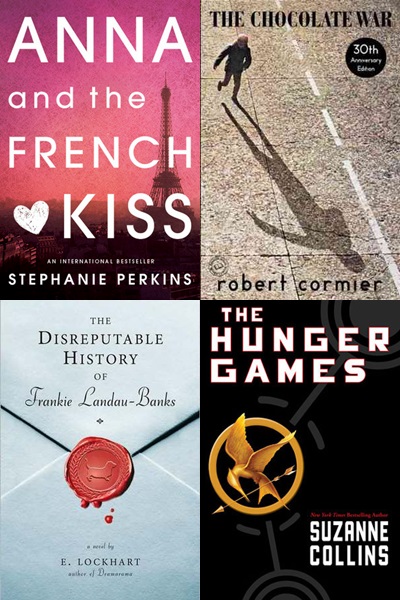 Anna and the French Kiss (Anna and the French Kiss, #1) by Stephanie Perkins
I haven't had much experience with chick lit and much less YA chick lit, but this book is soo sweet and fun. I also think the plus for this book is that the main character is studying in Paris and it's a lot about her coping with the big move, navigating the new school and exploring a new city. The book now also has a more prettier less juvenile looking cover.

The Chocolate War (Chocolate War, #1) by Robert Cormier
The author transpose the wider world to a boys school and looks at corruption and evil that can exist and the players, from the figurehead, the orchestrator, the foot soldiers, the muscle, the by standers, the sheep and the scapegoat/victim/s. I really like that it tries to simplify and look at corruption and power at a more understandable level and yet undeniably also shows that it can exist in the smallest of places.The book has great villain; clever, determined, just plain dirty and ruthless. Who are they? Your everyday people; students, teachers and priests, who in time possibly rule the world? If you think Lord of the Flies has a harsh perspective of humanity, this is perhaps even harsher for the Chocolate War takes place within a "civilized society".

The Disreputable History of Frankie Landau-Banks by E. Lockhart
Like smart witty characters? Then you'd like Frankie. Seeing how she was treated less than she'd liked because she was a girl and realizing that in the real world the ruling elite are mostly from the old boys club; she infiltrates her school's all boys secret society and pull their strings to show she too is smart enough and has the power to direct people.

The Hunger Games (The Hunger Games, #1) by Suzanne Collins
Why not? It is arguable the biggest YA book ever that spawned a 4 movie franchise. If you've watched the movie, read it as it will help to fill in the holes that the movie has. If you have watched or better yet read Battle Royale, try The Hunger Games. In some ways, yes, it is a less brutal story as compared to Battle Royale; one of those possibly being that it doesn't get into the head of each of the participants. Still, unlike Battle Royale and despite it's name, The Hunger Games doesn't only focus on the games but also the world in which it exist which brings a different dynamic to the similar killed or be killed arena type of premise. 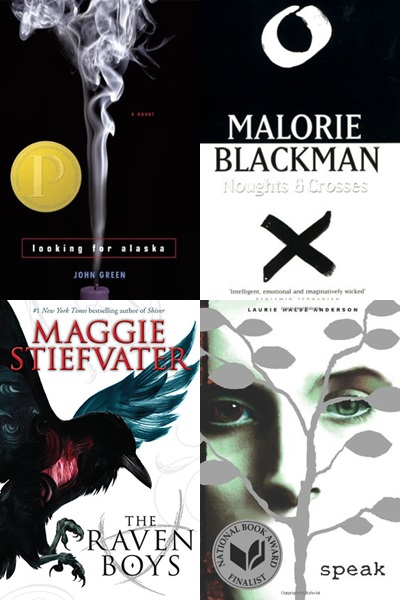 Looking for Alaska by John Green
Pudge obsessed with famous last words and newly enrolled in a boarding school finally makes friends with kids his own age and falls in love with the not available Alaska down the hall. A tale of friendship that also deals with loss and grief; the second half of this wrecked me...and it's not just the tragedy, it's about the people left behind and how devastated they were by what happened and struggling to make sense of something that doesn't. It kind of remind me of the Lovely Bones in a way.

Noughts & Crosses (Noughts & Crosses, #1) by Malorie Blackman
In an alternate world where the minorities are the majorities and racial prejudice and segregation are still prevalent, Sephy a Cross, the ruling race, and Callum a Nought, are friends. As they grow up, as much as they try to be just friends, romantic feelings have developed. Both struggle with the racial discrimination/subjugation (Sephy as she witnesses and Callum the receiving end) and the danger the existence of their relationship could pose them and their families. Their yearning to escape where they can be together and knowing that there is nowhere to escape to, is pretty heartbreaking. A lot of the characters here go through some awful stuff and I dare you not to be sobbing by the last chapter. The copy I read also had the short novel An Eye for an Eye which just broke my heart more.

The Raven Boys (The Raven Cycle, #1) by Maggie Stiefvater
I don't think I've read a lot of books that have an ensemble cast of characters and this one has a pretty awesome one. Blue has been told forever that if she'd kiss her true love, he'd die, which most of the synopsis will say and I almost didn't read the Raven Boys because I thought "true love?" "Kiss"...yeah...not my thing. Thankfully there isn't much romance. It's mostly about friendship, Welsh mythology and destiny. The story swept me away in it's mix of magical realism, mystery and adventure and I love the lyrical haunting style of writing.


Speak by Laurie Halse Anderson
Attacked by a senior just before her freshman year of high school started, at a party that got busted by cops when she tried to call for help, Melinda has now become a social outcast. The shock of the attack and the treatment she got from her friends, who unknowing thought she had foolishly sabotage the party, has silenced her. The story is narrated by Melinda's  inner voice, which just seems authentic. She is sarcastic, darkly funny and introspective and we follow her as she to struggles to navigate through her freshmen year alone, with the heavy secret she carries and her tormentor still roaming the halls free. 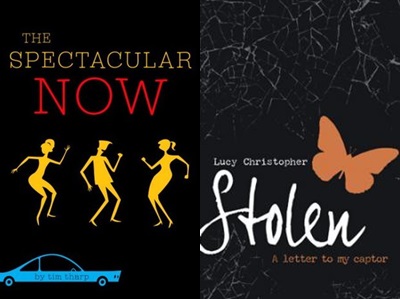 The Spectacular Now by Tim Tharp
I admit, I read the book because it was made into a movie which received very good reviews. A movie I wanted to see but still haven't. So in the mean time I read the book. What I like about this book unlike most YA books is that the character didn't feel like fan service. What I mean is that most main characters in YA are bookish, smart and introspective, trying its best to be reflective of the reader (assuming that readers are bookish, smart and introspective). Cutter is not. If I remember correctly, he was not much of a reader and is a jock. He is popular, likes parties and is the life of most. He talks to everyone, friendly and is the most extroverted person you'd probably come across in the fictional world. He's also an alcoholic and it's affecting his grades, work and relationships. The journey of battling addiction is not always a quick and triumphant one, so I kinda like the open ending of this one. I remember hearing the movie being criticized for dropping Cutter's and Aimee's relationship which was supposedly one of the most interesting thing in the movie...what can I say...this happened in the book. Their relationship was not suppose to save Cutter. All his past romantic relationships had not worked, the last one not working out was a consistent thing in the story. Cutter has an addiction which he need to be overcome first. If you have seen the movie, or seen Smashed, this may interest you.

Stolen: A Letter to My Captor by Lucy Christopher
"It happened like this. I was stolen from an airport. Taken from everything I knew, everything I was used to. Taken to sand and heat, dirt and danger. And he expected me to love him.
This is my story.
A letter from nowhere."
That synopsis intrigued me. Who is this man? Why has he taken Gemma from the Bangkok airport and make her a prisoner in the inescapable, dangerous Australian outback? The story, written as a letter by Gemma to,Ty, her Captor starts at the beginning; from the taking, to the confusion, the shock, the anger, the fear, the disastrous escape attempts and later semblance of affection for Ty himself. Is the affection real or resignation, a survival mechanism? A YA novel that explores Stockholm Syndrome - I know right...heavy stuff! If you've read Stolen, you might also want to check out The Collector by John Fowles (not YA) which has a similar premise but with has dual perspective.

So that's it, my top 10 picks. What are yours? Any similarities? Have I sold you on one of these books? 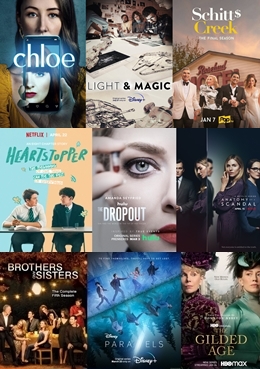