I'm picking favourites today. I also feel like I'm forgetting a title so I am looking forward to all your picks.

UnREAL (2015 - )
I usually can't stand anything on the Lifetime channel, but this is soo different from its usual shows. It's basically the behind the scenes look at a fictional dating competition, including all the ugly manipulations that go on. It is such a sharp series; its characters are all just so deliciously ruthless, especially Rachel and Quinn who are master manipulators who make the fictional dating show to be the success that it is but struggle to get the recognition from corporate.

Call My Agent! (2015 - )
Set in Paris, it centers on a talent agency juggling to meet the demands of their clients. This is such a fun show to watch, its episode plots often reflects the issues / scandals plaguing show business currently. Plus it stars a lot of French actors playing a fictional version of themselves: in the second season it has Juliette Binoche at Cannes trying to evade the unwanted advances of a slimy producer/investor.

Extras (2005 - 2007)
The series follows an ambitious actor relegated to working as an extra. I have not seen every episode but I really like the ones I've seen. If you like the Office, you'd probably like this, the humor is similar, it has characters in awkward but funny situations. Like Call My Agent, it has a lot of famous actors playing a version of themselves in very funny storylines. 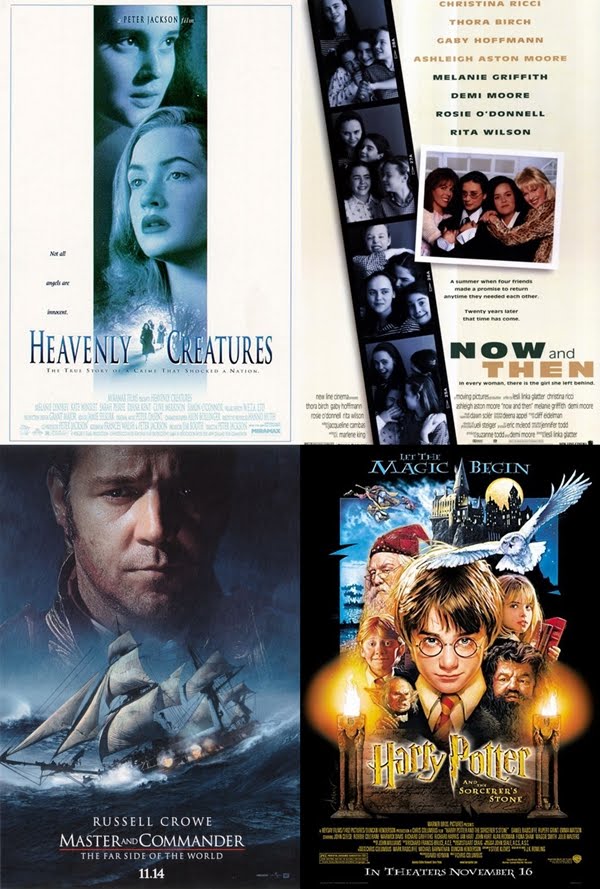 This has to be a quick one since I totally mixed up the dates/themes so came up with my picks extremely late.

Now and Then (1995)
I don't remember much of it now, but it is like the 90s friendship movie for young girls.


Master and Commander: The Far Side of the World (2003)
Love Love this one! And at its center is the friendship between the captain and the doctor.

Harry Potter Movies (2001-2011)
Aside from wanting to go to Hogwarts and have magic, don't you just want to be friends with them too. 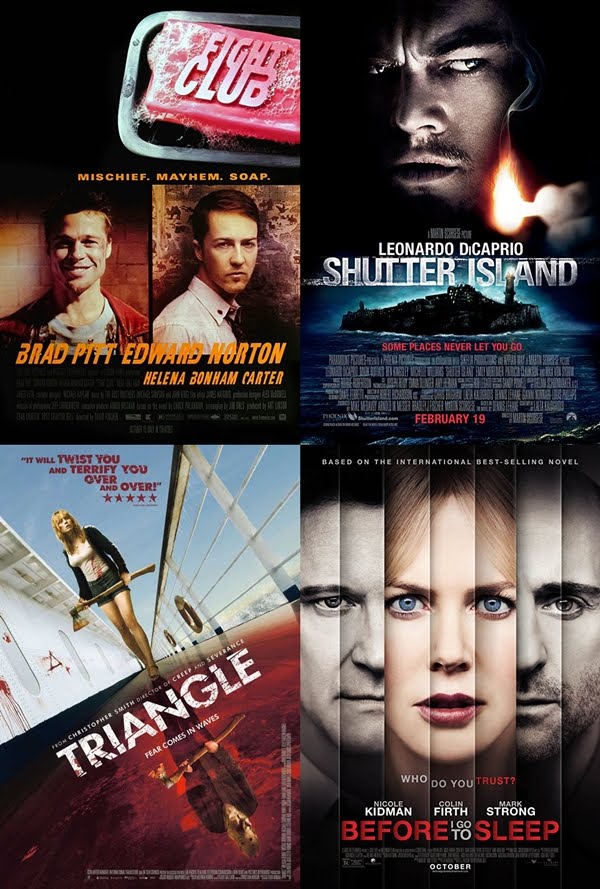 What makes a twisty thriller? I'm going with anything that just makes you think what is going on at every turn.


Fight Club (1999)
Well one of the usual suspects is Fight Club of course. Everything is just so odd and manic and it all makes sense at the end.


Shutter Island (2010)
I was reminded of this when I watched Tabula Rasa a few weeks ago. The gist: a federal marshal is assigned to investigate the disappearance of a patient at an asylum, but things just get weirder and weirder.

Triangle (2009)
This is one of those mindfuck movies like Fight Club. The gist: after a yachting accident, a woman and her group of friends board a cruise ship but she gets the feeling that this has all happened before.

Before I Go to Sleep (2014)
I love the book and wished this was a better movie; it's not bad but it could have been so much better. The gist: Since a terrible accident two decades earlier, a woman wakes up everyday still thinking she is in her late 20s, remembering nothing of the accident and her life after that, her mind resetting and unable to form any new memory after a full night's sleep. Can she trust the husband she wakes up next to, whom she doesn't recognize, or the secret psychiatrist she's been seeing or the secret diary that she's been keeping chronicling all the troubling yesterdays she has no memory of? 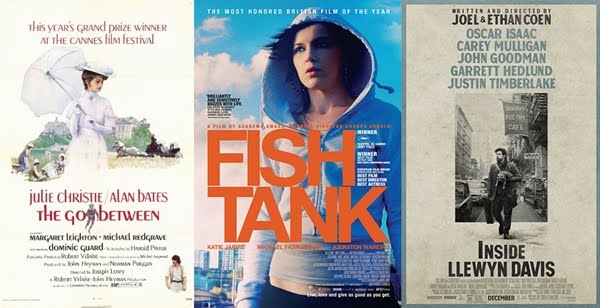 Hey! Another milestone! This is the 200 edition of TMP! Today's theme is one by thevoid99. I'm picking from those that have won either the Palme d'Or, Grand Prix or Prix du Jury.


The Go-Between (1971)
I've picked this before last year, so I'm copying and pasting the summary: Set in 1900, a boy spends his summer vacation at a school friend's grand home and becomes a go-between carrying messages for his friend's older sister and her secret lover. There was a recent TV movie adaptation and I think I much prefer this 1971 version which doesn't try to over explain things.


Fish Tank (2009)
Rebellious urban girl, Mia, dreams of becoming a dancer, despite the lack of talent, and is encouraged to follow her dreams by her mom's too friendly new boyfriend. I really like this one and Fassbander is very good in it.

Inside Llewyn Davis (2013)
The movie follows a week in the life of a folk singer in New York City. Wow, I can't believe I've not picked this before. My only guess is that it's probably not a movie that I love love, but I remember liking it. And there's the music.


Hey, if you've ventured past my usual movies post and found this book blog post, welcome. It's a new series that I've started: Monthly Book Picks where I select my favourite reads of the past month. Interesting coincidence: both my April picks' protagonist is named Allison. 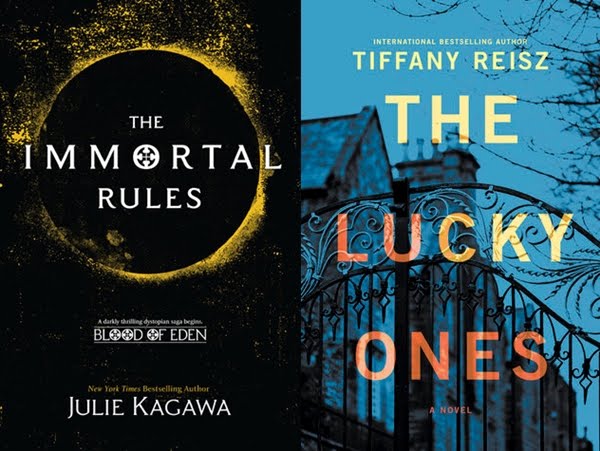 “Hunger flickered, always there, but I pushed it down. I was a vampire. Nothing would change that. But I didn't have to be a monster."


The Immortal Rules (Blood of Eden #1) by Julie Kagawa (2012)
The Gist: In a post apocalyptic dystopian future that takes place years after a terrible virus, the vampires are now living out in the open and ruling the cities (hence the title). A human girl living in the fringe of the city and society gets turned into a vampire. Forced to flee the only home she's ever known and passing herself as human she tags along with a group of humans on a journey to Eden, a place that may have a possible cure for the virus. It's been a few years since I've read anything vampire related and I miss the genre. So I finally picked up this one that has been on my to-be-read list for years. I really enjoyed it. It's a little slow at first but the action scenes in the later parts makes up for all that. Also, great protagonist. Kicks ass and has agency. I would say it is sort of a mix of Daybreakers and Underworld with a dash of Children of Men and The Walking Dead.


“It didn't even feel like lying anymore. It felt like forgiveness, leaving the past in the past. It felt like mercy. It felt like moving on...And what was one more secret in this house packed to the attic with secrets? ”


The Lucky Ones by Tiffany Reisz
The Gist: Allison had been one of several children fostered or adopted by a philanthropist / brain surgeon. She led a happy life in the doctor's home with the other kids until she almost died. Due to the suspicion that someone in the family may have tried to kill her, she is whisked away into the care of an elderly aunt. Thirteen years later, Allison receives a letter that the good doctor is dying and she decides to visit her foster family and perhaps finally find out what happened to her those years ago. Really like the book and I did not expect the places it went (in a good way) because the synopsis on the book (which is little longer than my gist) gave little indication. I found it quite scary too, and it's not with the whole she-once-almost-died mystery, but the deeper story of her foster family and the why and how they came to be.

Boy A (2007)
Of my three picks, I like this the best. Andrew Garfield plays Jack, newly released from a prison sentence for a violent crime he committed as a child. He is given a new identity in a new town to start his life again but his past soon catches up to him.

Under the Tuscan Sun (2003)
After her marriage fails, Frances buys a villa in Tuscany to start her new life. It has been a long time since I've seen this, so I don't remember much other than I enjoyed it.

Passengers (2016)
This one has characters trying to make a new start on a distant planet colony but a malfunction of their sleep chambers awaken them 90 years early. I didn't really like this. While it looked cool, I was bored and felt the story was too thin and a little dumb. With so many passengers on board and with help so far away, why would there be no crew and engineers on shift duty? Like sleep 115 years and work 5 years.