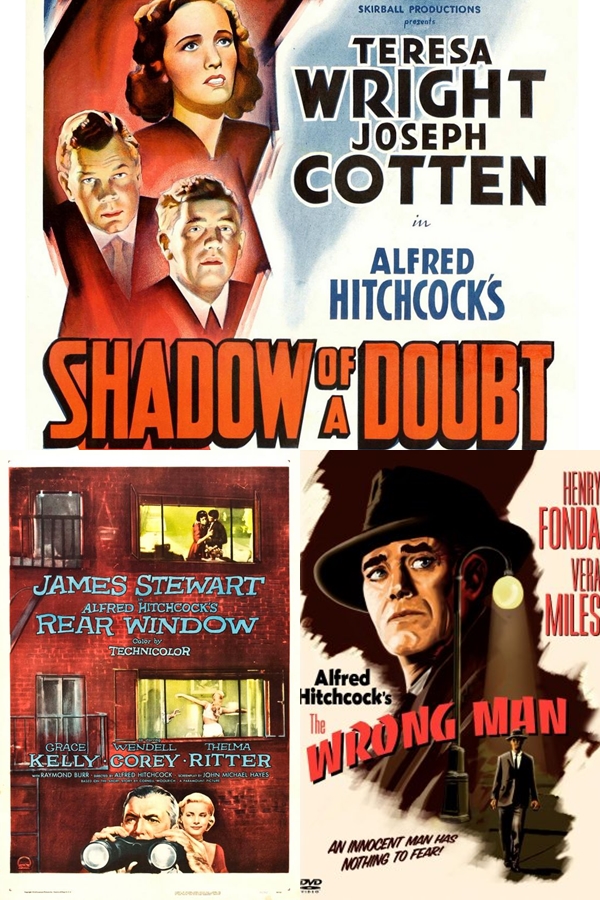 
Well this week is Alfred Hitchcock movies! I have picked a few of his movies before for other weeks' themes (namely Rebecca, Psycho, The Lady Vanishes and Strangers on a Train) so for the sake of variety, I will not be picking them again. Still, of the ones I've watched, I do like a couple of them so it was hard just picking three.

Shadow of a Doubt (1943)
A young woman craves for excitement in her dull life and is thrilled when her favorite charming Uncle Charlie comes to stay with her family for a visit. However she soon discover he is harbouring some dark secrets. If you like Stoker, I'd recommend seeing this; there are some similarities.

Rear Window (1954)
Confined to his apartment after breaking his leg, Jeff a photographer begins spending his time observing his neighbours from his window. He soon begins to suspect that a man in the next building to have murdered a woman. Unable to move himself, he enlists his nurse and his girlfriend to do the investigating. Quite amazing how much suspense is created from just using a single location. Just cut all the other noise and rely on story, characters and good dialogue. This wasn't Hitchcock's only single location movie, they're all just as good but I had to choose just one. If you like Rear Window, check out Disturbia (2007) too which is sort of modern twist to the story and wasn't bad at all.

The Wrong Man (1956)
In The Wrong Man, a string bassist is mistaken for a criminal and his world is turned upside down when events and coincidences seem to conspire against him. I think this is one Hitchcock less popular movies and really is a simple mistaken identity story that is effectively scary.