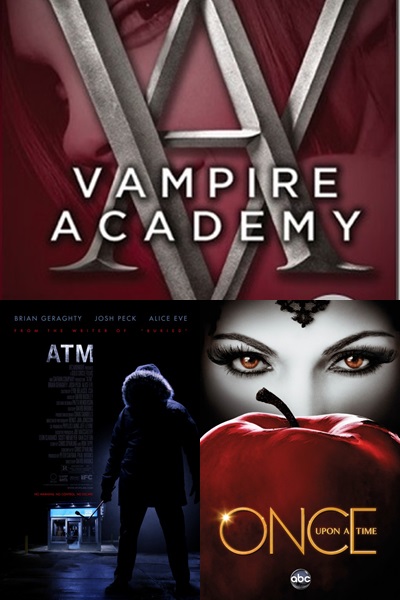 Vampire Academy
You may have read my mini review of the movie in a past StSatSP post. In brief, it was terrible. Now the book is a lot better. It was more thorough in explaining the different type of vampires and their difference and I kinda grasp all of it, though I'm not quite sold on their brand of vampires and half breeds. Rose is less annoying here; she is not spewing pop culture reference every other sentence unlike the movie. We get to see more of the friendship between Rose and Lissa and they really are great friends, very loyal. Lissa is less of a weakling which was the impression I get from the movie. She did do her part in many situations. I can definitely see the appeal of the VA series. It has a strong female friendship story and Rose and Lissa are both a force, proactive, taking action to secure their own safety instead of waiting to be saved.

ATM
I'm not sure I've heard of this movie prior to watching. The gist of it is that three co-workers gets trap in an ATM one wintry night by a hooded man as he stalks and tries to break into the booth to get to them. I don't know where ATM booths are located elsewhere, but in this movie it is located in an area that looks like to be far off from main roads and surrounded by a large parking lot which was empty? So here's a question, why have an ATM where there is no traffic at all? Who would ever go to such an ATM? And why is there a large parking lot for an ATM booth? I just don't get it. Is it just wanting to be bait for robberies. So you see...the set up is just ridiculous. More frustrating is that there are three of them trapped but somehow they weren't able to brainstorm on how to get past the menacing man nor try to take him down, instead they just sit and wait. And there's more...none of the characters had their hand phone on their person when they entered the booth. Seriously? Not one of them?  Aren't most people attached to their phones - and these are supposed to be young savvy investment bankers?? Arghh.

Once Upon a Time Season 3
Last week I nitpicked Grey's Anatomy, this time it's Once Upon a Time. Well I can't un-notice what I've already notice. What is up with Snow White's hair! That wig they have Ginnifer Goodwin wearing is terrible this season. It looks like a stringy brown mop on her. Was it always this bad in the last seasons? And the make up on the Wicked Witch - the green paint on her face is notably uneven on her face. It seems to be thin on some areas that I can clearly see her natural skin colour.

It has been a week of lists the past week:

Monday: I blogged about trying to be more creative
Tuesday: Top Ten Books I'd Give To Readers Who Have Never Read YA. So if you haven't read any YA before. Give some of the books in my list a try.
Wednesday: I did another movie blogathon where I list movies I like to see a sequel of.
Thursday: This is the fourth Thursday Movie Picks outing where I listed 3 Movies about assassins. Next Thursday's topic is Movies that feature Food Predominantly. If you love movies, come and take part in this weekly meme. You can read about future topics here.