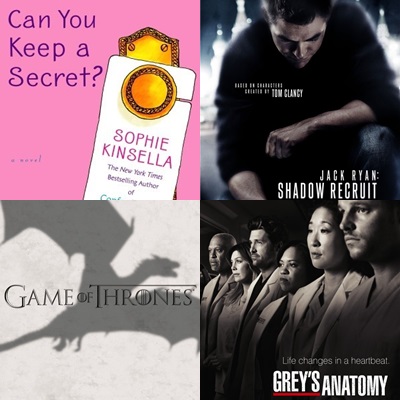 Can You Keep a Secret by Sophie Kinsella

I don't usually read chick lit (do people still call things chick lit?). I'm just not into cutesy comedies, but well you know there's only so much dystopian/apocalyptic tales I can read before all those depressing world gets tiring and old. So this book looked like fun. A book about secrets that isn't about a terrible soul crushing secret (We Were Liars...I'm talking to you)...perfect, since I didn't want anything bleak. Hat's off to this book too for pointing out that normal everyday secrets which can seem silly nothings but if they get out in the open they too can be horribly bad and embarrassing, although still totally survivable, and total entertainment for this reader. The main character, Emma's secrets were normal enough stupid things that we would all get embarrassed over. I do wish the romantic interest isn't rich, and was able to sweep Emma and us readers in a more humble way. Plus I wanted her to make it without someone powerful liking her romantically and who could possibly be attributed for her doing well at her job. Ultimately Can you Keep a Secret is a fun funny read and I liked Emma who seemed to be like the everyday girl struggling to find a job she likes and is good at doing, which I think all of us can relate to.

This movie was forgettable. The story is just boring. What is it about again? Oh yeah...the origin story of Jack Ryan when he was first recruited as a CIA analyst and him stopping some Russian from destroying the world and it's economy. A damsel in distress cliche was also thrown into the story which way just soo bad. And I can't believe that Kenneth Branagh played the bad guy...a Russian? In a movie that has a contemporary setting? I thought he only did period dramas save for that Wallander gig.

Awesome as always. What makes Game of Thrones are its characters so I'll go through the major ones:
So this has become a long Game of Thrones recap. I'll stop with those characters even though there are still many more. What can I say...the series has lots of characters and most of them are incredible. Can't wait to see season 4. I saw season 3 on DVD and I do wish they had more special features on the DVD. I don't understand why they can't put the same features that are on the Blu-ray on the DVD too...arghh!!

I watch this on and off. Not exactly great television but something to watch when there's nothing else on TV. The perfect hair on this series have always bugged me, I mean do surgeons curl their hair before going to work? And still have that bouncy wavy hair still look perfect after a long shift? Seriously the characters in this show have some of the most perfect hair! I've also noticed that the make up on season 10 is just awful. Dr Edwards and Torres just have so much blusher and makeup overall and Dr Wilson has this smokey eye thing going on. I don't think the make up was this bad in the previous seasons, where it looked more natural looking. Does anyone else notice the change in make up?

Around the Blog
Was a little busy the past week, so not much updates.
Thursday was the third Thursday Movie Picks post and the topic was Movies set in a Mental Institution. My favourite was The Princess and the Warrior, hidden gem was It's Kind of a Funny Story and my pick for worst was Sucker Punch.
Sunday, today, I've updated/revised some of the Thursday Movie Picks future themes. Please see the meme page here to see all the future themes up till the end of the year. The whole of October now has a Halloween theme and the five topics for the five Thursdays in October are: Unstable Characters, Zombie Movies, Found Footage Movies, Vampire Movies and Haunted Buildings.
---
Next Week
I'll be doing the usual Thursday Movie Picks and also Top Ten Tuesday since I like next week's topic.
Hoping to finish reading Vampire Academy soon.
I had wanted to do "a sequels you want to see" topic for my Thursday Movie Picks, but since there is already a similar blogathon (Attack of the Sequels) currently going on, I'll be participating that. So stay tune for my post on the 5 sequels I want to see.