Weekly Recap #6: Garden Spells, Snowpiercer and Flowers in the Attic 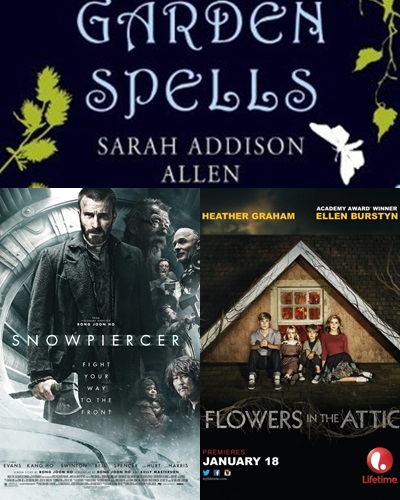 Garden Spells
A short read about the Waverly sisters who are not quite so ordinary. One, a caterer who can cook up dishes to meet the special needs of her clients and the other finally discovers where her talents lie when she returns home after a decade away. I haven't read a lot of magical realism and this is one I enjoyed very much. Sweet and charming story, I'd say it's a mix of Practical Magic and Chocolat.

Snowpiercer
Finally saw this after hearing/reading about it. It recently aired on one of those cable movie channels, which isn't exactly the ideal way to watch a movie since they either tend to be edited and have no subtitles which I have come to depend on. I'm not sure how much was edited out for Snowpiercer but what really sucks was there were several scenes where Namgoong used this translator device which translates whatever he said into English, and the audio for the computer translator was just soo much lower than the voices of all the other characters that I missed out on chunks of what Namgoong was trying to say. Aside from that, the movie started out well.

The world of Snowpiercer was interesting, the train is self sufficient and I love discovering the contents of each carriage. The aquarium and the garden ones were wondrous and thus such a contrast to the back carriages and the artic cold that lies outside of the the train. The look of the world of Snowpiercer I'd say was like a cross of City of Ember and Harry Potter/Wes Anderson movies for the front carriages. I was to a point sold on the whole lower class revolting against the ruling upper class premise until I began to see some plot holes. Well...it was either plot holes or I wasn't quite paying attention. How exactly did the class system work? The Snowpiercer I'm assuming represents the world; people in the front are the upper class, and at the back are the lower class. Unfortunately I think the movie does a deservice by not actually showing the lower class working, as such they're not exactly illustrating the exploitative nature of such a system. Secondly if each carriage exist solely for one purpose only, this meant that passengers would have to go through several carriages to go to whatever destination they were headed to...which in turn meant that armed guards would have to go through the kindergarten everyday just to get to the back of the train? Err...not really clever planning from the genius Wilford. And I don't get why anyone felt it was worth to fight for the control of the engine, in the end you're still trapped on a train, so yeah Namgoong is probably the only one who has his head straight. Still the train itself is fascinating and I like the characters so I expected a good payoff at the end, with the engine and the leader of the train, Wilford. I don't want to spoil it so I'll just say I was disappointed. In a way I understood Wilford's reason but it seemed such a tedious and convoluted way to bring about what he wanted.

Flowers in the Attic (2014)
I've not read the book but I am a little familiar with the story from having watch the earlier adaptation made in the 80's. Can't exactly compare the two adaptation since I watched the earlier one almost a decade ago. Some positive for this newer movie; good that they used kid actors who are closer to the age of the Dollanger children. It made believing their naivety slightly easier. Negatives; well this is a Lifetime channel movie, as expected the dialogue isn't really good. They do have some good actors here but even they can't carry some of the bad lines this movie had. Some scenes also seemed weirdly edited together, but since I saw this on TV, this may be due to some scenes having to be censored out. Overall not so bad. The sequel Petals on the Wind airs next week.

Wednesday: Did another Let's Get Creative post
Thursday: This is the fifth week for the Thursday Movie Picks meme where I listed 3 Movies that feature Food Predominantly. Do check out what my picks were as well as the blogs that participated in this meme. Fortunately Wendall spotted there was no theme for this coming week Thursday Movie Picks and so I have chosen one his suggestions; Movies about Time Travel for this Thursday. So if you love movies, come and take part in this weekly meme. You can read about future topics here.