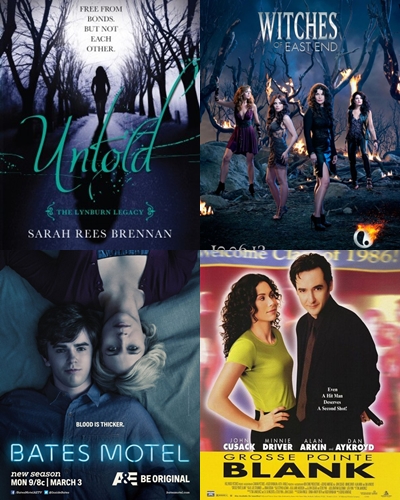 Read
Untold (The Lynburn Legacy, #2)  by Sarah Rees Brennan
Read the first book in the series, Unspoken earlier this year. Despite Unspoken getting really rave reviews and good ratings on goodreads, I did not share the same opinion. It was just a meh for me. But the ending of Unspoken felt very abrupt and more like a non ending, which is the reason why I have picked up the second book, Untold. If you have not heard of this series it's about a teenage school reporter who discovers that her sleepy English town (which has locations with whimsical names) called Sorry-in-the-Vale is home to Sorcerers who are trying to get back to the old ways of ruling. By the way...what is the collective noun for Sorcerers? Anyway, I don't think Untold improved much from the first book. The love triangle in this is frustrating as it always is in most stories. I hate that Kami and Jared comes close to actually communicating on things that matters but don't most of the time. However, this does have a better ending than Unspoken...a cliffhanger involving Jared which looks like the kind gothic ghost stories are made of. So yes, I will be coming back for the third book due for release late September this year.

Witches of East End - Season 1
Recently finished the first season. The family of witches aspect, 2 generations of sisters in this one, reminds me a bit of Charmed at least the first season Charmed before it seemed the characters/cast were in competition with each other as to who could wear less clothes. Quite enjoyed this first season where so far the storyline has been about defeating enemies from their past that have come back into their life, which I think has a more manageable plot than them being defenders of this realm.

Bates Motel - Season 2
Another great season where more bad stuff happens. We see more of Norman's unstable side and he is just scary during his bouts of explosive anger. When will someone see that he is just mentally not right instead of just referring him to as a sensitive boy? It'll be great if in the future season Norman actually get's institutionalize and see a psychiatrist try to diagnose him and discovering some of the crazy stuff that has happened the last few years. In Season 2 we also learn more about Norma's past when a family member comes to town, which explains a lot why Dylan seems to be the son that she loves less. Poor Dylan. I like that we see more of his character in this season and he is possibly the most normal member of the Bates  family. Can't wait for season 3.

Grosse Pointe Blank
When I did my Thursday Movie Picks on Assassins, someone recommended Grosse Pointe Blnak (I think it was Greg?) and so I caught it the past week. John Cusack plays, Martin Blank, a hit man who reluctantly goes back to his hometown (Grosse Pointe) for his 10 year high school reunion as he sees it as an opportunity to see his old girlfriend (Minnie Driver) and complete his latest assignment which happens to be in his hometown as well. The movie is a dark comedy and it's great. There's action, romance, and just so darkly funny. A lot of great lines. I love that whenever anyone in his hometown ask Martin what he does for living, he'd say professional killer and every single time people thought it was all joke. Then there's Martin's psychiatrist who is terrified of Martin because of his occupation and every advice/session pretty much ends with him telling Martin to not to kill anyone.

Thursday: Thursday Movie Picks #7 was Dramatic Scenes in which I included YouTube clips of 3 of my favourite scenes. Do check out what my picks were as well as the blogs that participated. Next Thursday's topic is Movies set Locally (you can choose country or state). Since the participators of past edition of this meme comes from various places, I don't expect to see any similar picks for this upcoming meme :). So if you love movies, come and take part in this weekly meme. You can read about future topics here.
Friday: Did another Let's Get Creative post.