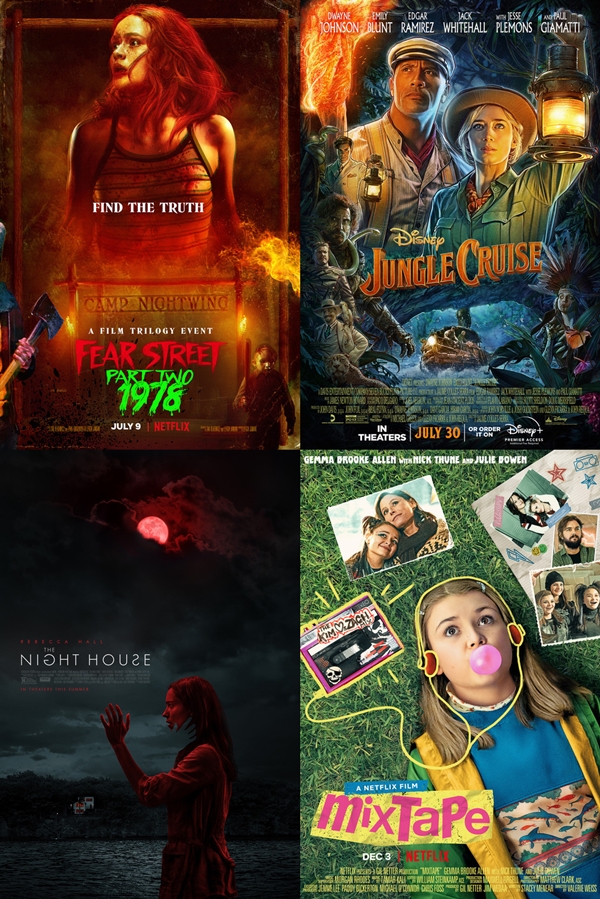 Hi and welcome to the 9th run of TMP. The Final Schedule will be up after this post, so keep a look out.
I'm not one to watch many new releases each year so I have few options. So out of the few, here are the ones I've enjoyed.
Fear Street: Part Two - 1978 (2021)
I've said this before, the Fear Street books was like THE horror book series I was into when I was growing up...oh and Point Horror books too (which last I heard was being made into an anthology series at HBO Max - can't wait for it). Anyway I was soo excited when the Fear Street movies came out and am so glad they all turned out decent. I enjoyed the 2nd and 3rd part but if I had two choose, it has to be the second one. I like the whole summer camp setting.
Jungle Cruise (2021)
I expected this to be bad, but it was fun. The movie is based on a themed ride in Disneyland and the movie does feel like an adventure ride. The one thing I did not like though is that in this, as well as in another recent action/adventure comedy he has been in, they always seem to make Dwayne Johnson's character be romantically involved with the lead female character...I wish they would stop. He is ok as the action comedy lead, but he doesn't do romantic lead well...it just falls flat.
The Night House (2021)
This movie is creepy and weird. For those that have seen this what did you think? I don't think the occult had anything to do with it. The husband used it as an excuse to justify his activities and the wife is just wrecked with grief and haunted by the revelation of his secrets so she too uses the occult to explain what the husband had done because she could not accept how terrible it was and that she never knew about it. So all the weird stuff we see like the confrontation with "nothing" I just saw it as a manifestation of her grief and inability to accept the secrets.
Mixtape (2021)
I love Mixtape. It is adorable. It's set in 1999 right before the year 2000 (there's even a whole side story thing about the grandma being worried about the Y2K bug) so it's super nostalgic for me as I was about the lead girl's age that time and I think it got the period pretty spot on. One thing I thought was funny is that the grandma seems to still be worried up until New Years Eve about the Y2K bug...even though Australia is like almost a day ahead of the US in welcoming the new year, which means almost everyone in the US would have woken up on the morning of the last day of 1999 with the ability to know the Y2K bug didn't happen, that is if they watch international news.
---