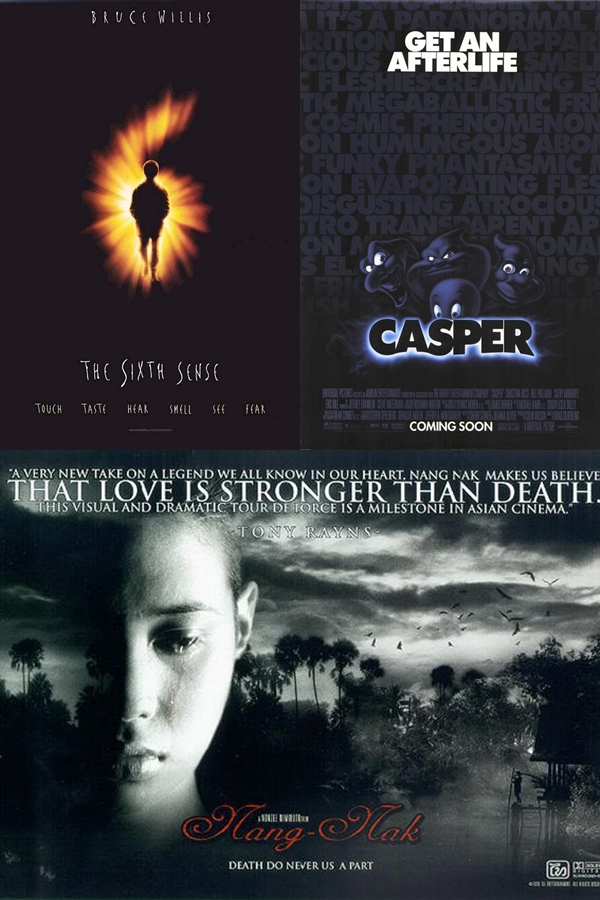 Hey welcome to the last week of the TMP Halloween Edition. I know, I know, how did October past by so quickly? I hope you have had a fun one watching scary movies. This week's theme was suggested by John Hitchcock @ HitchcocksWorld and I have to say, I love a good ghost story. I've already featured Shutter and The Devil's Backbone before, so I won't recycle them, but if you haven't seen them, go do it! Anyway here are some more of my favourites:

The Sixth Sense (1999)
I can't believe I haven't talked about The Sixth Sense on this blog yet! I think a good ghost story is both scary and tragic and this one balances it really well. That scene with the girl vomiting under the covers freaked me out until I understood what was going on and then it was just incredibly sad. The movie had so many moments like that.

Casper (1995)
I grew up watching this movie. We had a laser disc of it and I watched it a lot. Like who wouldn't want to live in an old manor and meet a friendly ghost?

Nang-Nak (1999)
For some reason I forgot all about this title when we had the Asian Horror theme so it's great that it suits this week perfectly. Set in 19th century Thailand, a man is summoned for war and leaves his pregnant wife living alone in an isolated house. After months away, he comes home to his wife and new born baby. All is well until he eventually finds out what had really happen when he was away. The movie is apparently based on a Thai legend and the story is so very tragic and sad; just the way I like ghost stories. Plus this is a period movie. If Anna and the King is the only glimpse of 19th century Thailand you ever saw on screen, try Nang Nak. I think the movie did an excellent job of recreating the period.

Participating Blogs/Bloggers
Posted by Wanderer at 4:30 AM