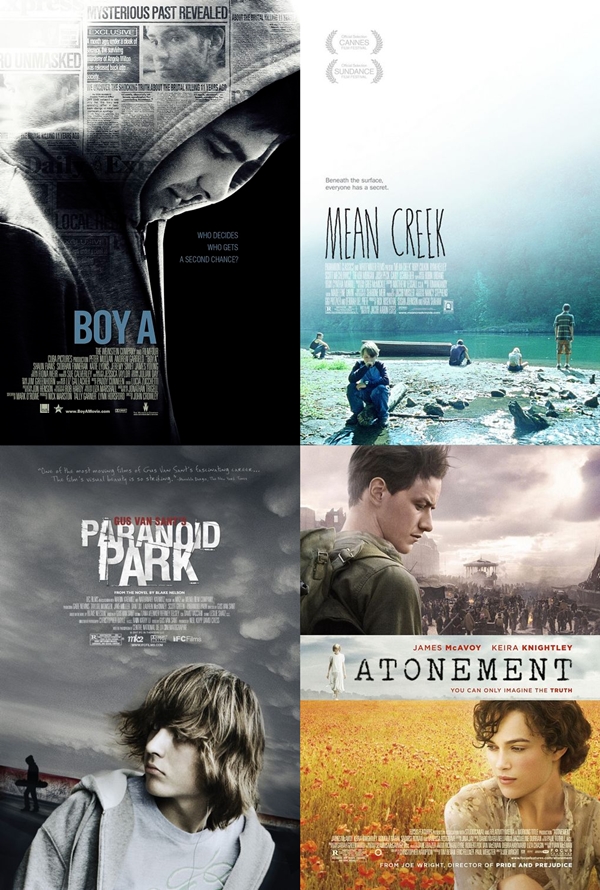 I'm wondering if this week's theme is challenging because I didn't need ponder over my picks this time around seeing that my picks (The three will all be hidden gems picks and I'll also include one bonus) today are the movies that inspired the theme. Back in 2008 I watched a trio of movies all around the same time that coincidentally had characters making mistakes, irreparable ones. These movies stuck with me because they involved children in crimes/incidents that destroyed lives. You can't help but think their own lives too would forever have a before and after. An after, if they had a conscience, would be filled with deep guilt and regret. How terrible it is to know and carry such a thing so young.

As always in alphabetical order:

Boy A(2004)
Boy A has quite a controversy surrounding it; first the plot is somewhat similar with a real life crime that occurred in the 1990's and the other I suppose for depicting a person who committed a heinous crime as human. Boy A is indeed bleak and challenging and is I think a very well made movie featuring a great performance by Andrew Garfield as Jack the Boy A in the title. Jack is a young man recently released from jail and has a tough road ahead as he tries to reintegrate back into society and carry the weight of his crime.

Mean Creak (2004)
A couple of friends lure a bully to the woods to play a prank and humiliate him but buttons get pushed way too far and things don't go exactly as they plan. This movie is just so good especially the performances of the child actors and I hardly see it get mention anywhere. One of the memorable scenes in the movie is the one that is shown in the posters...just the shock horrified look on the kids.

Paranoid Park (2007)
Alex, a teenage skater, is involved in a terrible accident. We mostly don't know what it is but he is deeply affected by it and becomes distant and distracted. This movie is a slow one but it gets there. I actually thought that they weren't going to show the accident but it does and it is pretty horrifying. It's one of those movies that I'd never watch again because of that scene.

Atonement (2007)
I thought I'd add a more well known and perhaps more accessible film for this theme as well. In Atonement, 13 year old Briony is an aspiring writer with an active imagination who makes a false accusation against her sister's lover for a crime due to a misunderstanding. At the time she did not  fathom the repercussions of her accusation and would live the rest of the life in regret and attempts to atone for her error in the only way she can.