Hello there and welcome to Thursday Movie Picks a weekly series where you share your picks each Thursday. The rules are simple: based on the theme of the week pick three to five titles and tell us why you picked them. For further details and the schedule visit the series main page here. 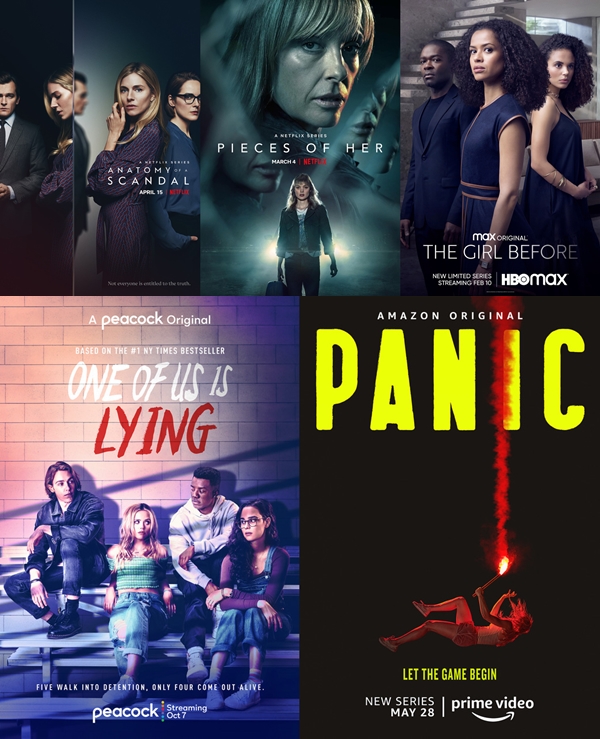 I’m picking the last 5 TV series I saw that were all adapted from books I’ve read.
Anatomy of a Scandal (2022)
A minister in the British government, a close friend of the Prime Minister, is accused of rape and his wife is convinced he is innocent but as she looks back at their life together, maybe she missed something in the past. I read this a few years back and have totally forgotten the plot. I think it’s because I read another British courtroom drama around that time which overshadowed this. Anyway, I really enjoyed the TV series. It was well made and acted. The courtroom drama and the drama outside of court - the whole how the family and his close friend the PM deal with the scandal was all interesting.
Pieces of Her (2022)
A woman’s perception of her mother completely changes when violence occurs during their trip to the mall. Karin Slaughter is one of my favourite crime novelists but of her books I've read, this is the one I didn't like. I would say the TV series is okay though quite missable, I suppose it can’t be helped since the book’s plot and the characters are just not as interesting as Slaughter’s other books so I was quite surprised this is the first of her books that got adapted. Side note, Slaughter’s Will Trent series of books is being adapted I think for ABC. I am thrilled about it but also disappointed as the Will Trent series is actually a spin off of Slaughter's earlier Grant County series and I wished they adapted Grant County first. I also think it would have been a better idea for it to be made by a premium network like HBO or Netflix as both of Slaughter’s crime series are very dark and the crimes are often violent and disturbing and being aired on a network like ABC might make the TV series less gritty and tamer or make it episodic when it should be more serialised with one story arc per season.
The Girl Before (2021)
A woman gets an opportunity to live in an ultra minimalist house that demands a certain lifestyle. The book for me stood out because it was quite weird and nutty. The TV series is not as weird and nutty, the house isn’t as minimalist (it’s more techy) and it removed certain aspects of the girl before’s relationship. Overall the series was an okay watch but I did think that David Oyelowo was miscast. I found him quite cheesy when he is suppose to be broody, aloof and controlling.
One of Us is Lying (2021)
When one of the five students at detention ends up dying from an allergic reaction after drinking from a water cooler dispenser, the others become suspects for his murder. I think the book was a lot better as it was more concise in its storytelling while the tv series changed and added some things seemingly for the purpose of lengthening the story. Still the TV series is an okay watch. If you like Pretty Little Liars, you might like this.
Panic (2021)
In a rural town with little economy, teens risk their lives to play Panic, a secret competition of various daring challenges, to win the  prize money they see as their ticket out of town. I really like the book which was a fun adventure thriller. The TV series was pretty fun as well and I enjoyed it. It's been a few years since I’ve read it but I think for the TV series they made the challenges a little tamer to make it I suppose more presentable and there's more of the teen relationship drama in it too. One thing I didn't like though is that the male actors who play the lead boys all look so old, they look closer to 30 than 18.
---