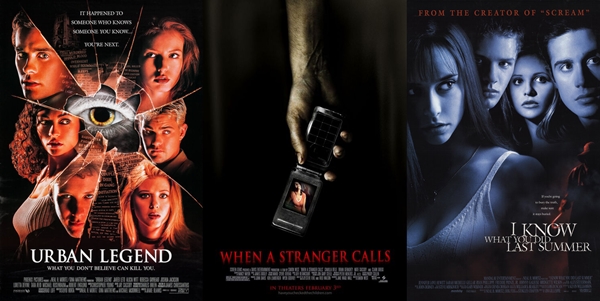 So today’s theme is folk or urban legends. Can't say I really have any favourites, so I'm picking the movies I remember watching and I'll refer/link to the urban legend it references.

Urban Legend (1998)
If you're not familiar with urban legends, this would should be your first watch, as it features and is basically like an introduction to a couple of urban legends. While not great, it's not a bad movie either. I think it's one of the more memorable 90s teen horror movie.
The Babysitter
When a Stranger Calls (2006)
There apparently has been several movies that were inspired by this urban legend and this 2006 movie is also a remake of a 1979 one of the same name. I would like to see the original since it has a higher rating than the remake which I thought was one of the more forgettable 2000s movies...not much happens.
The Hookman
I Know What You Did Last Summer (1997)
I rewatched this sometime last year. The movie wasn't very good but it was a very nostalgic watch...it was soo 90s and starred 4 of the biggest teen movie stars (though Hewitt was the only actual teen) then. Did you know this was actually adapted from a book by Lois Duncan a YA author that was quite popular in the 70s and 80s. I read the book a few years ago and found it was very different from the movie. The book was not a teen slasher; the Hookman was something the movie added combining the story from the book and the urban legend character. While a thriller, I remember the book being more of a cautionary tale and about taking responsibility. Anyway, there's a new I Know What You Did Last Summer TV series coming out this October and I wonder if they're keeping the Hookman from the movies.