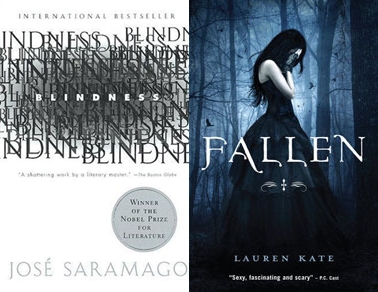 Blindness by José Saramago
The book has an interesting premise of a blindness pandemic. I think it is less about not having sight but more on exploring what people would do when they know they are not monitored by people around them. Will they continue to regulate their own behaviors like they used to or will they not, now that there is no one to literally see and judge them doing uncouth and uncivilized things. I'm looking forward to seeing the movie which was made a few years ago. The book went to some dark places and I wonder if the movie took it that far.

Fallen by Lauren Kate
This is another YA book that has been turned into a movie, set to be release next year. I've never been attracted to angel theme books because I don't like when books get religious and preachy. The very few angel theme ones I've read are on the fantasy, romance or apocalyptic side. Fallen is more fantasy/romance and I like this the least. Firstly it has a love triangle which is just so overused in YA books. Secondly we all already know Daniel is a fallen angel and that Luce and Daniel are a cursed couple (its in the book synopsis) and the book in the doesn't really go beyond being just a story about Luce finding out what we already know about Daniel and Luce. Thirdly nothing is ever explained. The shadows? The love story; we are just suppose to take that Luce and Daniel have this epic eternal love without giving any foundation to their love story? Why are they cursed? Fourth, why are the fallen angels all in one place masquerading not only as humans and but also that they are friends even when they are on different sides. I suppose things are left unresolved for the purpose of enticing its readers to read the 2nd book (it's a 4 book series), but having read the first book...not sure I'd pick up the second 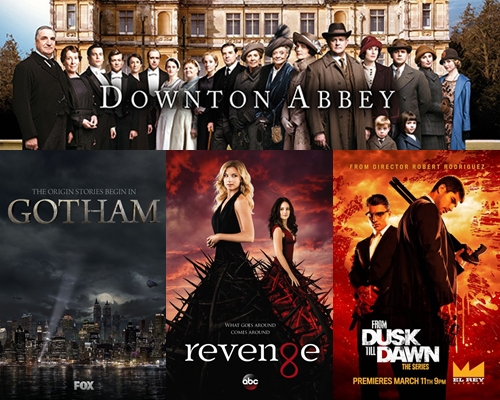 Edith has become irritating again. It was a bad idea bringing the child so near and now she's meddling in the rearing of the girl. Whoa Mary! Will she drop Gillingham...sure looks like it. And can everyone stop inviting Miss Bunting upstairs!

Gotham Season 1 Episode 3
Am I missing something from the end of episode 2. So Gordon and Bullock caught the creepy kidnappers, but obviously something bigger is going on there right? I thought episode 3 was going to dig deeper into the case. But instead it's about a balloon vigilante?

Revenge Season 4 Episode 2
What is wrong with Charlotte? she like latches on any new guy that comes around? And now with the fire? She's getting nuttier and people are so going to find out because it's so obviously arson...

From Dusk Till Dawn Season 1 Episode 1
I vaguely remember the movie. It had George Clooney and Selma Hayek with a snake and crazy club filled with vampires...that's about it. It has since been made into a TV series and I'm so glad one the cable channels is airing it albeit a little late. The first episode is explosive! Even though I can't remember which actors played what role in the movie, every time I see Seth Gecko speak I can imagine George Clooney speaking the same lines. Clooney obviously played this role in the movie and I'm right after checking IMDB. I love how they dressed the Gecko brothers in this. They look like they jumped out of some fashion magazine of course and just so out of place. Which in a way works because they so obviously are and so out of their depth with the turn of events or more like Richie being a little trigger happy. And Richie and those glasses...he does look insane doesn't he? Overall this series looks promising. I like the dialogue between the brothers, their relationship is interesting and I can't wait for the second episode.