So the past two weeks or so I've been watching a lot of TV because it's that time of the year where all the TV show have their series and season premieres. I think this is the first time ever that we've had so many scripted TV series making their premieres on the local cable channels the same week or some even within 24 hours of their US/UK premieres. These cable channels have finally figured that they either air these show immediately or not ever bring these shows in at all because no one will be watching them if they bring them a season or two late like they used to.

Anyway...here's a recap of some, not all, of the series I've been watching. 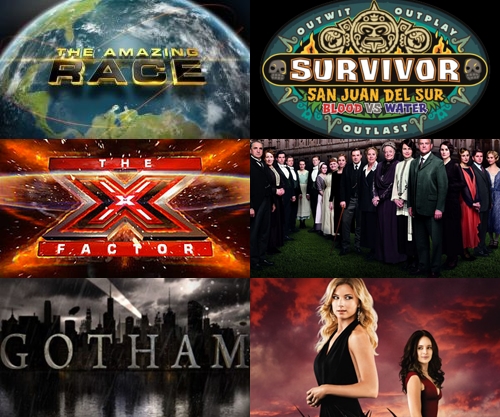 Amazing Race 25
Still love this show. It always fun seeing the contestant completing the challenges and navigating foreign countries under time and budget constraints. This is probably one of the most challenging game shows to play and I suppose especially to produce from a logistical standpoint.

Survivor 29
Similarly I still love watching Survivor mostly for the strategic games the contestants play. It's still early days; the fun usually really begins when the tribes merge and the alliances start to come into play more.

X Factor 11 UK
I've only seen the US version which did not get a 4th season. The UK version is I believe where the show originated from and so the format is of course similar. Currently the contestants are at the judges houses. Thus far only the male solo acts have given amazing performance.

Downton Abbey Season 5
The first season was the best. Each subsequent season after were inferior and this new one continue to be so. Mainly because the characters are acting so stupidly and the newer characters are just so very weak. Lady Rose I suppose was introduced to be the young blood in the Crawley family after Sybil death but argh she is just like the annoying teenage cousin. Then there's Miss Bunting who's suppose to be Tom's new love interest. She gets invited to a big dinner at the Crawley's and somehow makes comment after comment that insults them.

Gotham Season 1
Not really a fan of most of the DC superheroes, but this seems really interesting having the story start off where it all began when Bruce parents were killed and yet not have Bruce be the protagonist. It's fun seeing all the younger versions of the characters in the Batman universe. It does get a little campy in the second episode with the two kidnapper characters. I'm also not getting why James Gordon is being frank with Bruce with the failings/corruption of the police department. Bruce is rich and very mature for a child, but still a child. Still I'm enjoying most of the show so far.

Revenge Season 4
I've been binge watching season 3 so that I could watch the season 4 premiere. It surprises me that I continue to enjoy this show which essentially is a revenge soap opera. But honestly it is a fun series with a lot of clever set ups which doesn't necessarily mean they all play out smoothly for Emily. Sometimes it's more fun when it doesn't and we get to see the characters carry out their contingency plans if they already have one or if they don't...just scramble. We lost two major characters in season 3 which was incredibly unexpected and so sad but I suppose necessary to illustrate the stakes. Now I'm looking forward with what they'll do in future episodes with the reemergence of a major character.