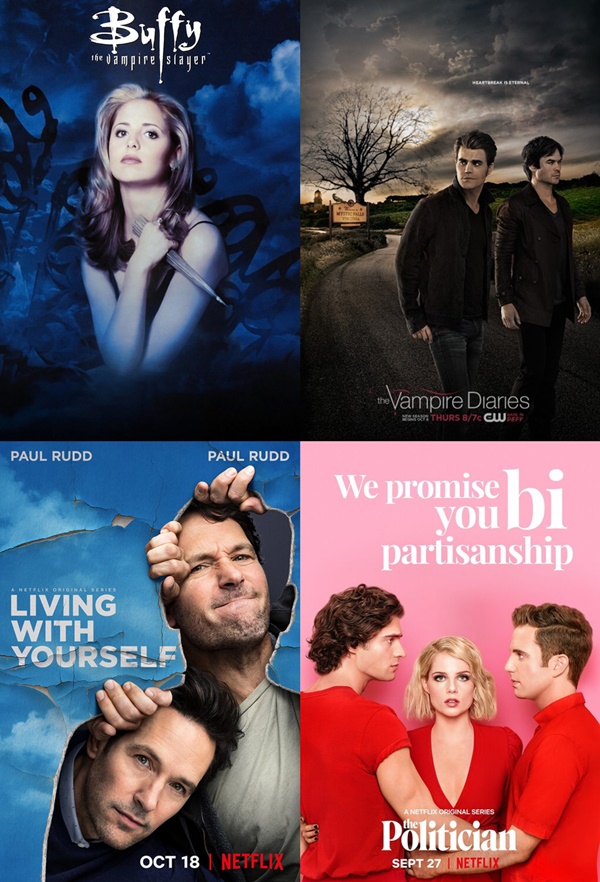 I have been looking forward to this theme. Remember we had a similar one for movies with TMP #144 and I thought we must have a TV one as well since there are plenty of fun rivalries on TV. I'm going with some slightly older series and some very new ones that I like.

Buffy vs Faith - Buffy the Vampire Slayer (1997 - 2003)
I haven't seen this in the longest time, and I can't remember exactly why Faith became bad, but she did and she and Buffy battle it out at some point.


Damon Salvatore vs Stefan Salvatore - The Vampire Diaries (2009 - 2017)
Damon hates his brother Stefan but still sort of loves him too and they keep competing for the same girls. Damon has the best lines as well, he is the master of sarcasm, directing it and his bitterness often at Stefan, the more guilt ridden brother.

Miles Elliot vs Himself - Living with Yourself (2019 - )
This is a new dark comedy about Miles who is struggling at life and decides to go to a spa to relax and become a better person but instead finds himself to have been cloned and now have to compete with his clone on which one of them gets to live his life.

Peyton Hobart vs Astrid Sloan - The Politician (2019 – )
The series follows students competing to become class president. I really enjoyed this, I found it funny and I actually expected this series to be much more mean spirited. I mean look at other Ryan Murphy series like Popular, Glee and Scream Queen...the meanies in them are super super mean. In comparison despite this being about politics, school politics, it is less mean than those other series.