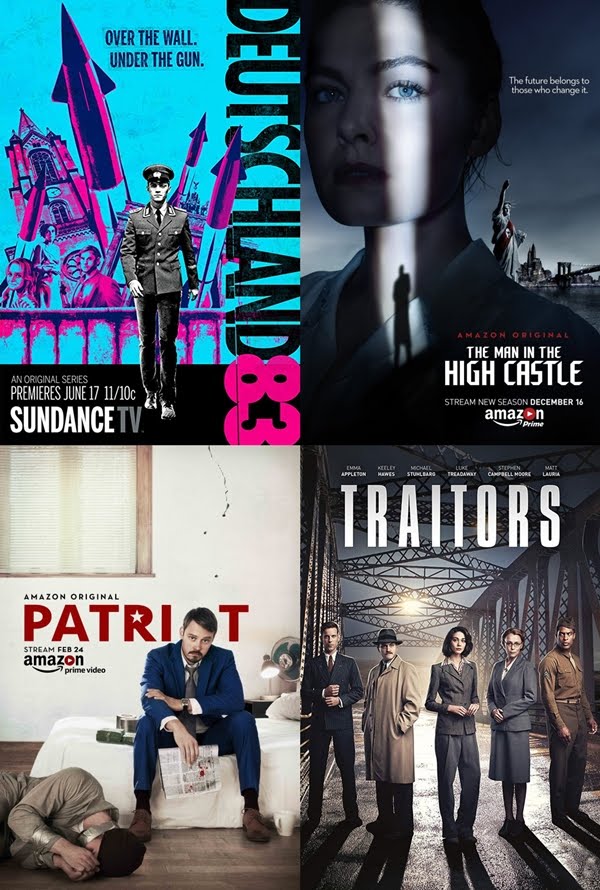 I just realized there was a similar theme last year. I totally overlooked it. Oh well, I suppose there are tons of TV series about secret agents or spies so there would be plenty to choose from. Here are my picks, the first three I like a lot.

Deutschland 83 (2015) & Deutschland 86 (2018)
The Gist: The German drama follows an East German border guard who is forcibly recruited to be a spy and infiltrate the West German army. I really enjoyed this series. If you like 80s set cold war dramas then I definitely recommend this, especially the first season, Deutschland 83, which has more of the whole spy stuff.

The Man in the High Castle (2015 - )
The Gist: The series is set in a alternate history world where the Axis powers won World War II; the US has been divided into two with the East under Nazi occupation and the West under the Japanese and there is an illusive Man in the High Castle trading/collecting(?) mysterious films that give glimpses of a different outcome to the war that gives the resistance hope. This is another pick which I've picked earlier this year for Book-to-TV Adaptations. This is such an interesting series and gets better every season. The last time I talked about this series I mentioned the political intrigue and the science fiction elements in it. What I didn't mention is that it also has the secret agent/spy element where a Nazi agent infiltrates the Resistance making it a perfect pick for today's theme.

Patriot (2015 - )
The Gist: A depressed suicidal intelligence officer assumes a non-official cover in order to facilitate the purchase of a foreign election. Neither the title nor the plot particular interested me but because I read some good reviews I gave the series a try and it really surprised me. It is good...like really good. Patriot is a dark comedy drama thriller. The main character constantly finds himself moving from one bad situation to another, often due to the bad intelligence he's received, where nothing goes as planned, forcing him to fix one problem that only causes other unexpected problems that further need fixing. All of it is taking its toll and he is spiraling into depression. I know all of that sounds very dark and disturbing which it often is but the series also manages to be funny. I would actually describe Patriot as a little like In Bruges but with a secret agent instead of a hitman and with hints of Wes Anderson due to the oddness and quirkiness of many of its characters.

Traitors (2019 - )
The Gist: A British civil servant agrees to spy on her own government for the Americans in the aftermath of WWII. This was my latest watch. Of my picks today, I liked this the least but it was still a decent series. The story was interesting though I found it quite slow. Things only really start to move along half way through.