Hello there and welcome to Thursday Movie Picks a weekly series where you share three to five  movie picks each Thursday. The rules are simple simple: Each week there is a topic for you to create a list of movies and tell us why you chose them. For further details visit the series main page here. 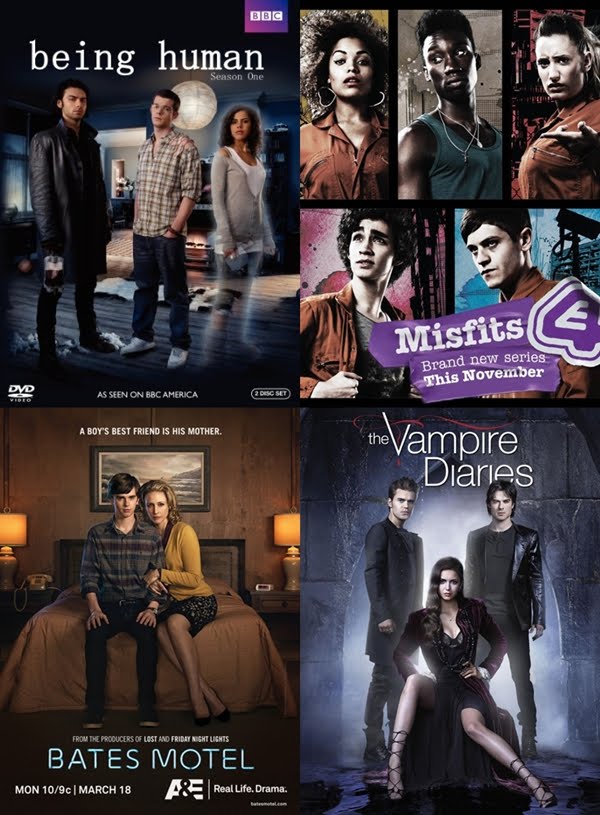 First ever Halloween/Television edition, this is going to be fun. I'm picking favourites.

Being Human (2008-2013)
I feel like I have talked about this series somewhere here before, but since this is the first TV horror theme, I'm not quite sure when I would have. So anyway the gist, this UK series follows a ghost, a werewolf and a vampire sharing an apartment and them trying to hold on to their humanity. I have to admit, that plot summary sounded so so stupid the first time I heard it, but I had heard good reviews so I gave it a try and turns out I love it (there are five seasons, but I have only seen 3). It's a horror/drama series that is at times funny and often just so sad as well. If you like American Werewolf in London, definitely give it a try, even how the werewolf got turned reminds me a lot of that movie.

Misfits (2009-2013)
This one follows 5 juvenile delinquents (about late teens/early 20-ish youths) who while doing community service gets hit by lightning during a freak storm and get some special powers. I know this sounds more like a superhero sort of series...it sort of is and sort of not just that too as it's mostly about characters trying to get a handle on their own powers; many can't control it which leads to disastrous horrifying consequences. Anyway love this series. Even when it wasn't that great in season 4/5 it was still pretty good. Like Being Human, it just balances drama with horror and comedy elements really well. And like Being Human, Misfit is also getting a American remake...so go and watch the original first.

Bates Motel  (2013-2017)
I have not seen the last season yet, but like the first three seasons. The series is a contemporary prequel to Psycho. In the first season, teenage Norman Bates and his mother is new in town and have just opened the Bates Motel. We see glimpses of the man Norman would become as the series progress and throughout it there's this sense of dread that Norman is going to destroy everyone around him.

The Vampire Diaries (2009-2017)
The gist, two vampire brothers, Stefan and Damon, vie for the affections of a human girl Elena, who looks very much like a girl they used to know more than a hundred years ago. It's a teen soap with vampires - my guess is most people won't give this a chance. Which is a pity, this series is soo much fun, totally bingeable. I've seen all the seasons except the last, and I think it's been consistently good. The world building and the mythology it creates for all the supernatural characters are great. Favourite character probably has to be Damon, the so-called bad brother, because he is so consistent, consistently selfish that is that even when he does a good, seemingly selfless deed, he does so because it benefits him to do so...and also, he has the best lines.

So that's it...my three picks. What movies made your list today?

Participating Blogs/Bloggers
Posted by Wanderer at 3:30 AM