This week's Thursday Movie Picks is A Stranger 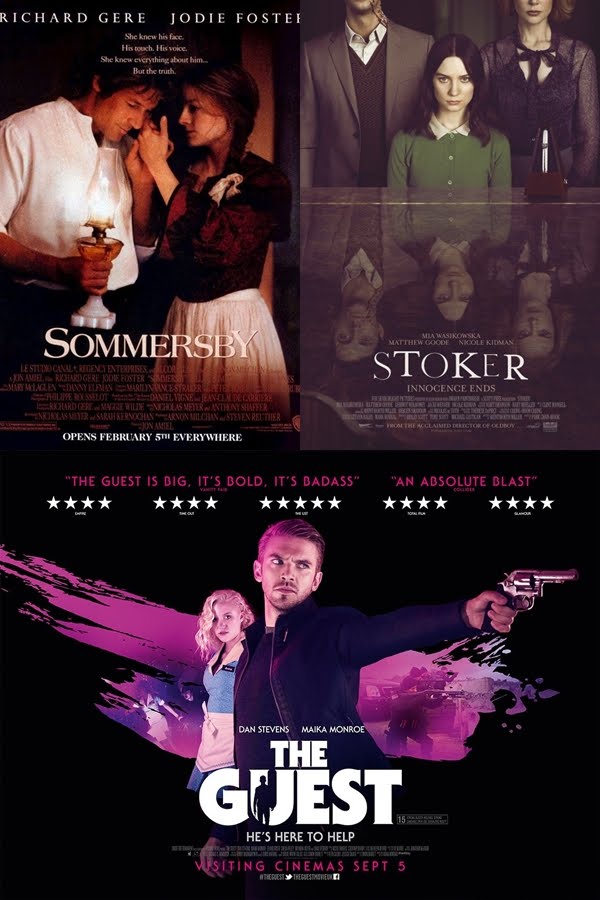 This is I think one of those more unique sort of theme unlike say remakes or vampire movies...so I'm curious as to what movies end up on everyone's list today. Anyway here's mine, the bottom two picks are the ones that I like.

Sommersby (1993)
I've seen this at least twice, but this is one of those movies where I retain very little of what happens other than the basic plot and a bit of the ending. A man returns home after the American Civil War, but his wife suspects he is an imposter.

Stoker (2013)
After India's father dies, an uncle she never knew existed comes to live with her and her mother. I've picked this movie so many times before but here it is again because it fits so well and also a favourite of mine. A beautifully shot psychological thriller.

The Guest (2014)
A man visits the family of a fallen soldier and claims to have served with him. He's so nice and charming that the family lets him stay with them. The only roles I had seen Dan Stevens play prior to seeing this were all middle/upper class British guys and this was such a departure; he got really physically fit and plays an American with a southern accent. Also you'd never think the guy who was cousin Matthew could do sinister, but yeah Dan Stevens was so so good in this. Of course this year there was Legion, where he got to play crazy as well...which were the best bits of the very inconsistent TV Show.


Participating Blogs/Bloggers
Posted by Wanderer at 3:30 AM