This week's Thursday Movie Picks is Movies About Artists (Painters) 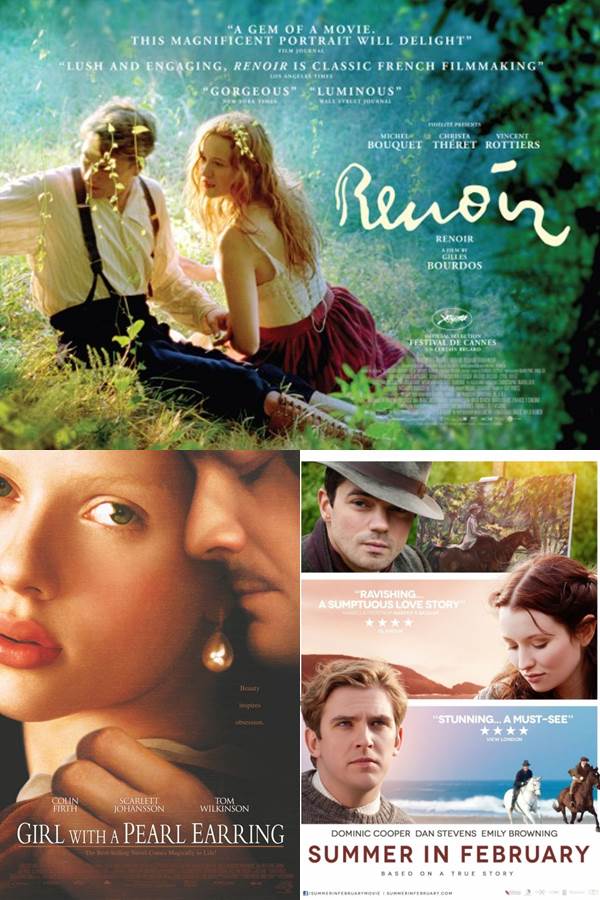 We've had themes on writers and musicians, so I thought let's do one on painters. Did I realise there aren't a great many movies about them, maybe not. My choices were slim, in fact I think these were the only 3 I've seen.

A fictional tale about the unknown girl in Vermeer's famous painting. I've picked this one before so I'll keep this short. Love this one. It's slow moving but so good and such a beautiful looking film . The set design and the lighting makes everything look like they came off the paintings.

Renoir (2012)
Jean Renoir the son of the famous painter returns home during World War I to convalesce after being wounded. Assisting his father, Jean meets his latest young muse who would become his own muse in his eventual filmmaking career. Like the Girl with a Pearl Earring this film was just gorgeous. I came into the film without reading the synopsis thinking it was about the painter; it's actually more about the family and their relationship. I knew nothing of the painter Renoir beyond just having seen his paintings; he was an old man the time the film is set, suffering from arthritis affecting his hands which required him an assistant to prepare his brushes and place them in his hands but continued to paint till the end which was just fascinating.

Summer in February (2013)
A love triangle involving two painters and a land agent at an artist colony in Cornwall. The movie was unfortunately very dull, I just could not care for the story. Unlike the above two films that took total advantage of them being films about artists and using their work as a reference for the visual style of the movie, Summer in February doesn't quite do that; it doesn't have a visual identity. I think it's probably because it features more than one artists it couldn't exactly amalgamate all their artistic style and turn it into the film's visual style which takes out the fun of watching a film about artists.