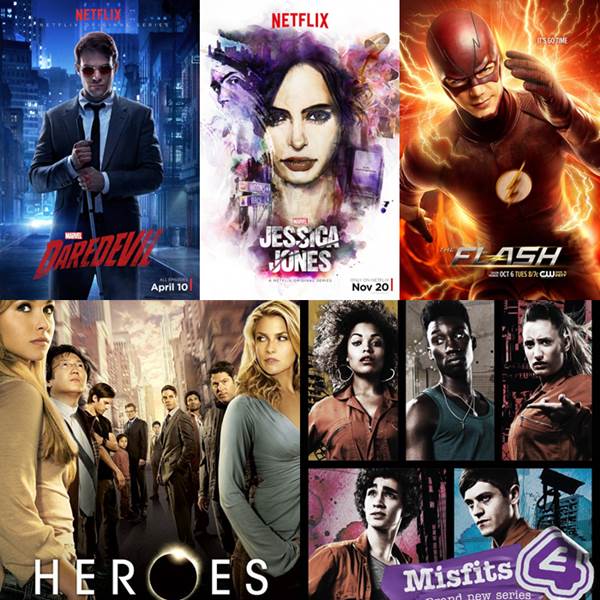 I think my favourite Thursday now is the last Thursday because it's the Television Edition. As I've mentioned before, because I now have subscribe to a streaming service, I watch a lot more TV and I have been yearning to talk about them. I have also been really looking forward to today's theme because I just love this genre.

I think it's the best out of the Netflix Marvel series for now, we'll have to see how Iron Fist is when it premieres in March. The fight choreography in this is just so good and it feels more gritty when we see both Daredevil and whoever he is fighting with gasp for breath and struggle to be the better fighter. My favourite overall is the first season; it had a better villain, a mortal villain. With the arrival of Elektra in the second season, we'd probably see more supernatural elements which I don't really like. Anyway... I have to say I love the costume choices in Daredevil; in season 1 Daredevil simply wore like a black shirt and like tied a black bandanna to cover his eyes. Season 2 he got a little upgrade, which still looks modest and suits Matt's character. I especially like Elektra's costume, which was like this simple black top with a red turtle neck that she uses to cover her face, which is so much more practical and looks so so much better than the corset outfit Jennifer Garner had to wear as Elektra in the movies. Let's just hope Elektra's costume remain practical in season 3.

Jessica Jones  (2015 - )
We don't get a lot of female superheroes, so yay for Jessica Jones. Like Daredevil, this one is also pretty dark and gritty. So the gist is that she's a person with special abilities, who after suffering from a recent trauma decides to run a private detective business, lay low and not be a hero. I came to watch this knowing very little about Jessica Jones as I had never heard of the character before and I think I enjoyed the series a lot in part because I didn't know what she was up against. I think this series truly has the most terrifying villain ever because not only is he nuts...his power is the kind that you never want anyone to have.

The Flash (2014 - )
I could not watch Gotham, Supergirl and Legends of Tomorrow past the first few episodes. Arrow is okay but just don't think too much because everything will seem stupid once you start to, as characters like die and get resurrected, so basically there are no stakes? Anyway....out of the DC comics superhero TV shows, I think The Flash is the best. A lot of it probably has to do with Grant Gustin just being great as Barry Allen. Even when the show gets bloated with its 20+ episode season and sometimes ridiculous plots, Barry still seems like a real person.

Heroes  (2006 - 2010)
So you may have heard of a series that had a great first season and just went a downward spiral afterwards...yeah it was Heroes. The show was not based on a comic book, which was really refreshing but yet looked like it was and had characters and story we didn't know about, so it was all very fascinating the first season. Unfortunately the show just wasn't able to capitalize on that the rest of the seasons so I'd say stick to just watching the first season. Even the new sequel series in 2015, Heroes Reborn was bad and pretty much had characters running in circles asking where's Claire! I'm like,  Claire knows better than to return to the sinking ship.

Misfits (2009 -2013)
This is a gem. Love it. It's a UK show, so I'm guessing not a lot of people outside of UK would have seen it? I do think it's now available on a couple of streaming services, so if it's on yours, add it to your queue. The gist is; 5 juvenile delinquents (about late teens early 20-ish youths?) are stuck doing community service at their community center when they get hit by lightning during a freak storm and get some special abilities. The whole series is basically about them learning about their powers and dealing with other people who were also caught in the storm and now have powers as well. A lot of the powers in this are interesting in that they often relate to who the characters are as a person. For example, there is runner who develops the ability to sort of time travel and another I assume was probably a gamer and when hit by the storm is somewhat stuck in seeing the world like a video game, specifically something that looks like a Grand Theft Auto game. Iwan Rheon, Ramsay Bolton in Game of Thrones, is in this too and he plays a painfully shy guy who has the power of invisibility and his character has the best character arc in the series. There's 5 seasons in total but as this is a UK series they're short seasons. I would say the first 2 seasons are the best because the original cast is intact. The 3rd season is still great but sad because 3 more characters would exit the show by the end of it. Be warned that the show is not afraid to kill its main characters, so brace your hearts. That said the show is also often very very funny. In short go watch it!


Participating Blogs/Bloggers
Posted by Wanderer at 2:59 AM