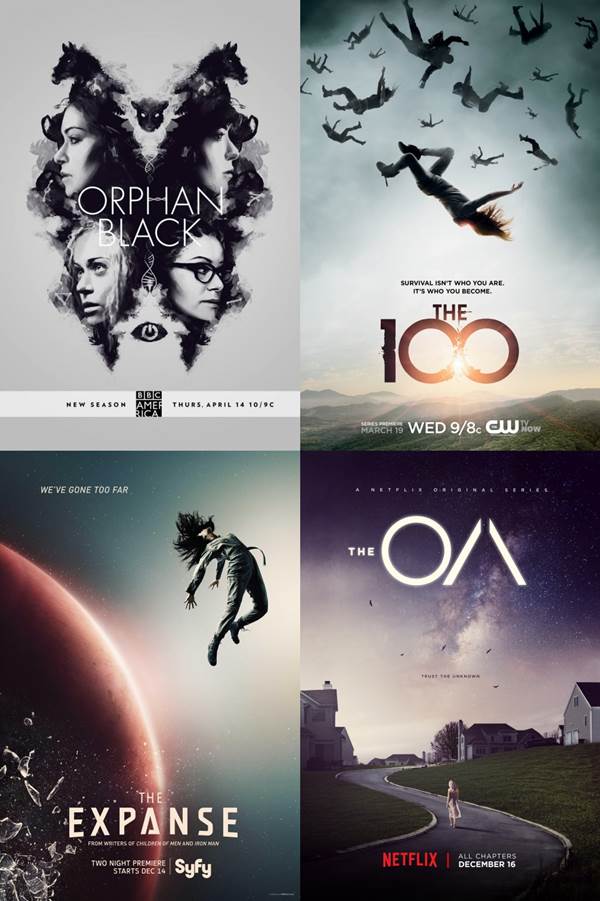 First TV edition. Yay! I've been wanting to create a TV edition for some time. I think the last year or so I've been watching more TV than movies. Which is not at all surprising since we are in peak TV, there are so much good stuff to watch and streaming service finally landed on our shores last year (Yes it took that long!) which certainly has given me access to TV shows like never before. My picks today are those that I've seen the past year which I really like.

A young woman witnesses a suicide of a woman who looks exactly like HER. So she assumes the dead woman's identity to find out what is going on and finds herself in this big secret experiment/conspiracy and find others that look like her - they're all clones! We get Orphan Black on cable here so I've been following it since 2013. I think this year's season 5 is going to be the final season, which is good in that they're working at a conclusion, hopefully a good one. I don't think the show has been consistent throughout; the middle seasons lost me a little but I think the fourth season was good again. Despite its sometimes meandering-ness, Tatiana Maslany as all the clones is always excellent making them all fully lived separate characters.

The 100 (2014 - )
Earth has been devastated by a nuclear disaster and a community of humans have escaped it by living on space stations. In this society, all those found guilty of a crime are put to death (because rehabilitation is not something they have the resource for), except for children under 18. So when the stations' resources become scarce a century later, a group of 100 juvenile delinquents (deemed expandable) are sent to earth to see if enough time have passed for it to become habitable again. Based on a YA novel and airing on the CW (in the U.S.), I don't think a lot of people were keen to check it out, plus from what I hear CW doesn't get a lot of viewers like networks like NBC? The first few episodes of season does feel a little YA-ish but it gets better and I think it's actually good. I'd say it's a little like Lord of the Flies meet Sci-Fi, at least in the first season. The turning point for me was episode 4 of season one when one of the kids kill another. A witch hunt occurs, a known bully is accused and the group is ready to execute him, except that it wasn't him. When the group finds out who it really is, they're not quite ready to serve the same punishment. Do they punish a person for the crime committed or for the person that he or she is? These kids are not quite sure what kind of society they trying to make in the midst of also trying to survive in an environment alien to them. So yeah, if you're just checking this series...give it a few episodes.

The Expanse (2015 - )
I'm just going to use the IMDB plot summary - "A police detective in the asteroid belt, the first officer of an interplanetary ice freighter and an earth-bound United Nations executive slowly discover a vast conspiracy that threatens the Earth's rebellious colony on the asteroid belt. " This series airs on the SyFy in the U.S. and I think SyFy doesn't really give a good impression, I mean they did make Sharknado. I sort of expect bad ridiculous plots, bad acting and bad effects from anything coming out of SyFy. But since I heard some good reviews of The Expanse I checked it out when it became available on streaming. I'm not that experience in watching Space Sci-Fi TV series (I mean sure I saw Star Trek but I was to young to know what I was watching), anyway what I'm trying to say is I think it's actually really good. The world feels lived in, interesting characters and an intriguing story. Its plot does take its time to unravel and get the characters storyline to converge, but it's all good and I can't wait for season 2.

The OA (2016 - )
A previously blind woman reappears after a seven year disappearance with her sight restored. I'm going to talk in vague terms here because the less you know of the plot, the more you'd enjoy the series I think. Anyway I enjoyed this series. It has an interesting story and has that very experimental way of storytelling that is appealing, but I do wish it was a little more polished and I could do without the "dance". I understand the purpose of it was for the five to have this little thing that was exclusively their own, but the dance was a little too cheesy for me, like I turn away when they start doing it. If you have seen Brit Marling's other work, Another Earth and Sound of My Voice, I think you'd enjoy this. The OA does share some similarities with them, it has some pretty imagery like Another Earth and has a somewhat similar character, a young woman returning home after a long absence trying to reintegrate back into society. Like Sound of My Voice, the OA has a character telling a story, the truth of which is uncertain and then there's the intricate physical movements performed by the members. I don't think a season 2 has been announced for the OA so I hope it does eventually get renewed since things aren't really resolved.