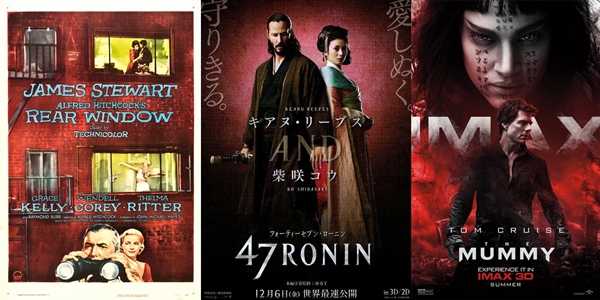 I'm always annoyed when I watch a movie where the actor is like 40 or 50 but is playing a much younger male character of 20+ to 30+ while the actress they are acting alongside is actually around the age or the female character which is 20+. I mean what were the producers thinking? The actor may look good for their age but they definitely don't look 20 years younger good. Here are a few movies guilty of such.

Rear Window (1954)
There are so many Hitchcock films that cast male leads that are usually nearly 20 years older than the female leads: North by Northwest, Vertigo, To Catch a Thief...But I'm gonna pick Rear Window, because in it, the nurse who comes to care for the male lead who has a broken leg is played by an actress who was about 6 years older than James Stewart, but she plays sort of the older maternal woman and in one of the dialogue as she is giving relationship advice she refers to him as a "young man". When I saw Rear Window the first time a long time ago, I had thought the couple played by Stewart and Kelly were having a May December romance. However, upon watching it the second time and having heard the nurse refer to James Stewart's character a "young man", only then did I realise that he was playing a much younger character, someone closer in age to Grace Kelly's character. Seriously? Stewart looks closer to 50 than 30.
47 Ronin (2013)
Keanu Reeves plays a man who grew up with and falls in love with his master's daughter. The age his character is supposed to be is never mentioned but it seemed to imply that he is a young man, so 20 to 30 plus, at least that is how young the female character, the love interest, looked like and the characters are supposed to be close in age since they grew up together. Keanu Reeves when this movie was released was almost 50, and while he does he does look young for his age, he does not look 30 and the age difference is so obvious when he shares the same scene with the actress playing the love interest.
The Mummy (2017)
I could really pick quite a number of movies Tom Cruise has starred in the past 10 years: American Made, Edge of Tomorrow and Mission Impossible...they all had him star alongside actresses, who are often playing the love interest, who are close to 20 years younger him. Cruise's character's age is also almost never mentioned but I'm guessing he is always playing someone who is perpetually in his mid 30s. You know what, I'm waiting to see a movie where he actually plays a grandfather, with a partner who is also in their 60s.
---