This week's Thursday Movie Picks is Movies for Seniors / The Elderly 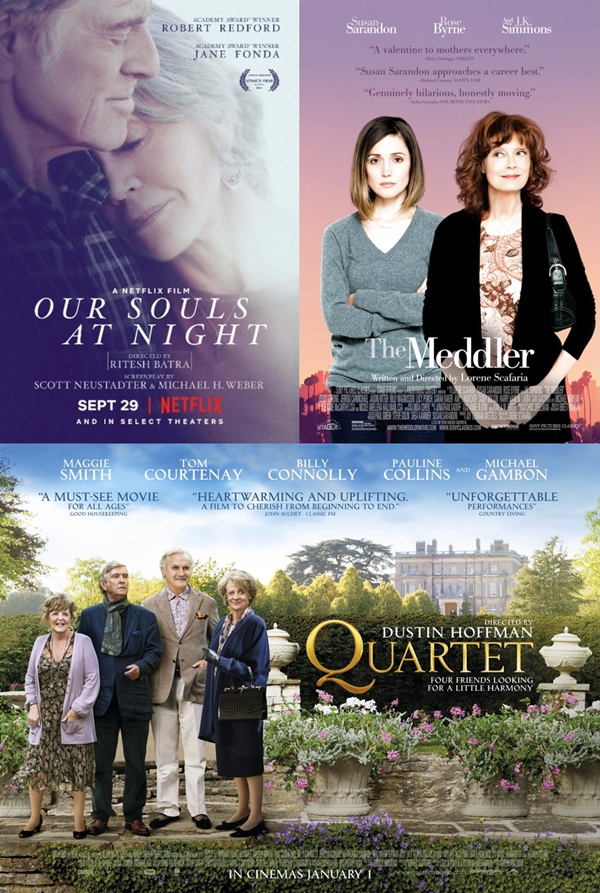 I've been noticing, say in the last ten years or so, that there are more movies where the main character or an ensemble of characters are the elderly and touching on issues that are part of aging which I thought were clearly targeted at seniors. Rightly so, I guess, since there are quite a lot of places experiencing an aging population where these seniors have both the buying power and the time to watch movies and wouldn't they want to see themselves reflected on screen. Studios have got to tap that market right? Plus there are those senior citizen discounts movie theaters tend to have to get seniors into theaters. Anyway here are the movies I like.
Our Souls at Night (2017)
Two old neighbours who have each lost their spouse some years back have had little contact with one another until out of loneliness one of them seek companionship from the other. I had actually happen to have seen Barefoot in the Park (1967) starring Fonda and Redford which had played on TV just before this premiered on Netflix. 50 years later and I think both of them still have pretty good chemistry.
The Meddler (2015)
A widow moves to Los Angeles to be closer to her adult daughter after her husband's death. When her daughter rejects her over-mothering, she plays the mother role to her daughter's friends and an employee at a store she frequents. I like this one, it's quite sad and sweet too. Susan Sarandon plays the widow, who's lonely and a little desperate to do something and be needed hence the over-mothering which her daughter just doesn't want. So she sort of have to find her own place in a new city and make new friends.
Quartet (2012)
Set in a home for retired musicians, a group of residents' preparation for a concert is disrupted by the arrival of a new resident. I don't remember this as much since I haven't seen this for quite some time. But I remember enjoying it and thinking it was just very charming and funny.
---