Monthly Book Picks: The Month of June and July 2018


Hey, if you've ventured past my usual movies post and found this book blog post, welcome. It's a new series that I've started: Monthly Book Picks where I select my favourite reads of the past month on the first Monday.

I'm so terrible at this; because it is a once-a-month thing, last month I forgot to do a post. So this month, it will again be for two months: June and July. 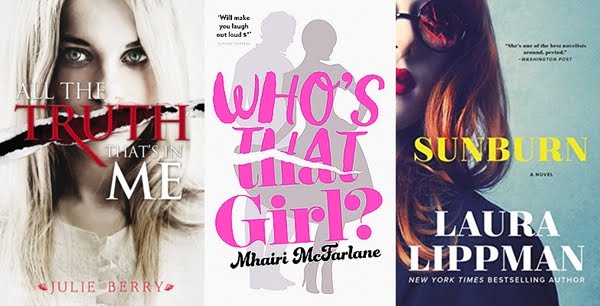 “I am shocking. What was done to me was shocking. I am outside the boundaries forever, no longer decent.”

All the Truth That's in Me by Julie Berry (2013)
The Gist: Four years ago, Judith disappeared from her town. Two years ago, she finally returns with her tongue cut out. While Judith herself is unable to speak about what happened to her, she is assumed to be a fallen woman thus now an outcast ignored by family and friends. Only when something threatens her town does the past slowly reveals itself. Let's start off with the cover; I hate it. The cover makes it seem like it is some grungy high school contemporary story. It is not. This is actually historical fiction set in unnamed period which is likely during the time of the Puritans. The rest of it I actually love (ok maybe not so much the ending, just because it feels as if everything wraps up a little too quickly in the last 10% and a little too nicely, but maybe that's just me being a little too nitpicky). I especially love the second person narration; Judith telling us her story through silently speaking to her childhood crush (now a man, out of reach for her now due to her outcast status and him being engaged to another) in her thoughts. It's filled with such longing and wanting to be seen and not assumed the worst that is so excruciatingly heartbreaking which just further fittingly illustrates her isolation and loneliness.

“Learn to spot irrelevant people. Don't expect someone who doesn't know who they are to care who you are.”

Who’s That Girl? by Mhairi McFarlane (2015)
The Gist: When Edie is found kissing the groom at a colleague's wedding, all the blame falls on her, and she is quickly shamed online and at work. In order to give the incident some time to cool off, Edie's boss sends her away to ghostwrite an autobiography of a hot new actor currently filming in her hometown. I used be such a book snob (I still am :), but in other ways) and turn up my nose on chick lit, but now I greatly enjoy them and I love love this one. The best chick lits, isn't all about the romance. It's usually about overcoming something usually with the help of family and friends, finding romance along the way and all with a lot of humor mixed in it...and Who's That Girl? is I think one of the best I've read thus far.

“It's a special art, asking people to do things, yet making it seem as if you never asked at all.”

Sunburn by Laura Lippman (2018)
The Gist: Two strangers, Polly and Adam, meet at a local tavern. Both are supposedly just passing through in the summer, yet they end up staying, starting an affair. But neither of them is being truthful about who they really are and when someone dies, the truth slowly begins to surface. I really enjoyed this. The book had like little hints of Gone Girl in the beginning with Polly being such a strong character who just dominates the story. With her true self/back story revealed ever so slowly, Polly always just seemed she could be so much more dangerous than she let on, which made Sunburn such a page turner for me.