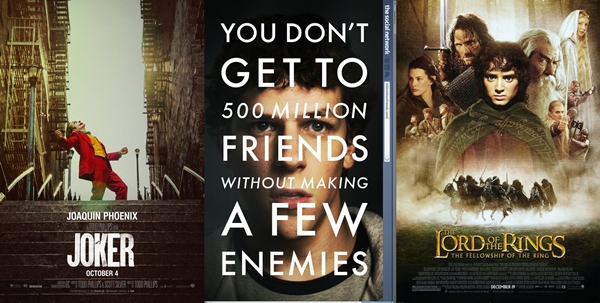 Well this was tricky. I usually only remember a score when I really like a movie and have seen it at least twice, otherwise it all just fades into the background. Anyway I'm picking the newer films for this category which is after they merged the musical/comedy with the dramatic score.
Joker (2019)
Hildur Guðnadóttir is one of the few female composers to win in any scoring category. I had not seen any the nominated films when the Oscars aired so when I finally saw the Joker much later I got it. It's a bit depressing with these heavy strings but it's good.
The Social Network (2010)
I think I've only seen The Social Network in full only once, but the movie gets played on some TV channel now and then and I'd always catch bits of it and that's when I really start hearing the score and I like it.
The Lord of the Rings: The Fellowship of the Ring (2001)
Now this one I liked immediately. Epic movies always have a distinctive sound.
BEST ORIGINAL SONG

A Star Is Born (2018) - Shallow
I don't really listen to pop music much nowadays so I only heard the song last year when I finally saw the movie and I love it. I like that it was more of a singer songwriter sort of tune and  I was disappointed when her character eventually went to the Pop route in her career.
Once (2007) - Falling Slowly
The music in Once is definitely the kind of sound I gravitate towards to so I fell in love with Falling Slowly (as well as other songs from the movie) at once and bought a bunch of albums by the two musicians after seeing the movie.
Aladdin (1992) - A Whole New World
Disney's musicians were in top form in the 1990s so I really had a couple of choices. I'm going with A Whole New because it is so much part of my childhood and even after almost 30 years, (I'm generally bad at remembering lyrics) this is the one that I remember most of the lyrics of.
---