Here are my favourites:

Dead Poets Society (1989)
Childhood favourite. It's about a group of people meeting to talk about literary stuff of course I liked it.
Gosford Park (2001)
I think I saw this the first time when it was released on DVD and thought it was the most boring thing ever; like what were these dull old timey people doing. I guess I had been too young to pay any attention to it. A few years later I decided to give it another try and loved it. It's this sharp and often darkly funny upstairs downstairs drama and murder mystery that takes place in a manor house. Also it has a great ensemble cast.
Eternal Sunshine of the Spotless Mind (2004)
It's has this super weird but unique premise that I thought I wouldn't like but I did. It's this great funny, quirky, quite sci-fi-ish and emotional movie about a man trying to forget an ex-girlfriend and then later trying desperately to hold on to his memories of her. 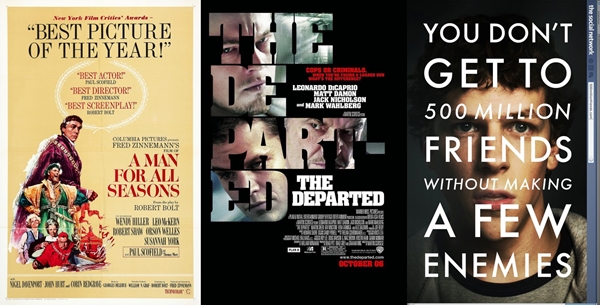 BEST ADAPTED SCREENPLAY
A Man for All Seasons (1966)
I like dialogue heavy movies and this having been adapted from a play is just that as it follows Thomas More trying to navigate the political minefield of sticking by his principles without offending the king and losing his head.
The Departed (2006)
I've said this before, mob movies bore me but this tension filled adaptation of a Hong Kong film was interesting and thrilling to watch.
The Social Network (2010)
Adapted from a book about the founding of Facebook, this was adapted by Sorkin so of course it was sharply written and had entertaining verbal sparrings.
---