I'm picking the most recent winners that I like and it's a theme within a theme. Can you guess what it is? 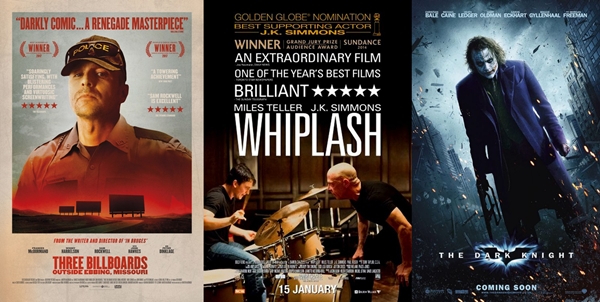 BEST SUPPORTING ACTOR
Sam Rockwell in Three Billboards Outside Ebbing, Missouri (2017)
Rockwell plays the immature, not-that-much-brain-cells and violent police officer who clashed with anyone to do with the billboards.
J. K. Simmons in Whiplash (2014)
Not a fan of the movie; it was over the top and trying way too hard to shock us. Still I thought Simmons was good as the demanding and terrifying instructor.
Heath Ledger in The Dark Knight (2008)
A meaty role and Ledger played it really well. If he had lived, maybe he would have gotten a spinoff movie.

BEST SUPPORTING ACTRESS
Allison Janney in I, Tonya (2017)
I, Tonya was a surprising gem for me, I really enjoyed it. Janney was great as Tonya Harding's mother, a hard working class woman who was emotionally and physically abusive towards her daughter.
Mo'Nique in Precious (2009)
I really like this movie which had a lot of good performances including Monique who also plays a bad abusive mother; another one up for worst mother ever.
Tilda Swinton in Michael Clayton (2007)
Love this movie. Once again a lot of really great performances here including Swinton who plays the stressed and cold lawyer.
---