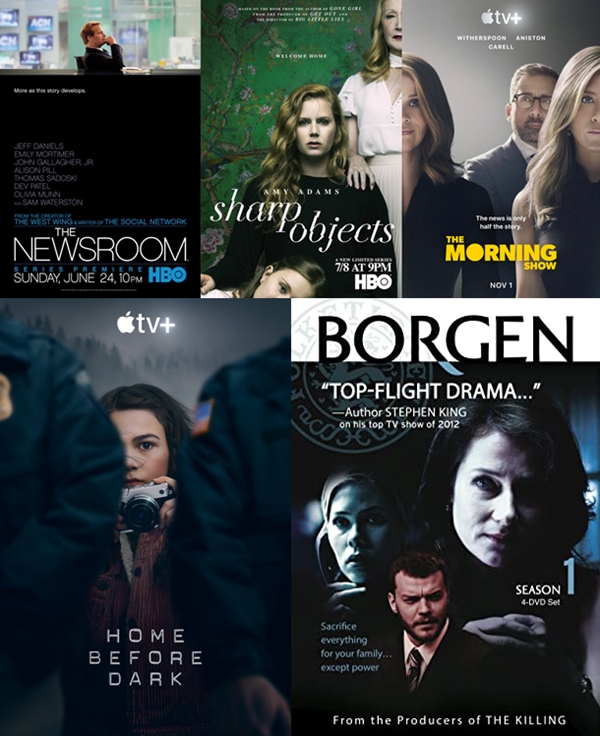 This week's theme is a suggestion by Getter. Well this is quite easy. I happen to have seen a couple of TV series featuring journalism in the past year.
The Newsroom (2012 - 2014)
Follows a news team as they bring in a new producer and make changes to their show. I saw the first season of this way back in 2012 and have only just completed the other seasons this year. This is created by Sorkin so the characters do a lot of fast talking with a lot of big words thrown it; there's lots of banter and arguments so that's entertaining and I overall enjoyed it. But it gets heavy handed with whatever message it wants to deliver and very preachy about journalism.
Sharp Objects (2018)
A reporter goes back to her hometown to cover the murder of two preteen girls and to also confront her past. I've picked this before for book to TV adaptations and it's here again because it fits so well and because I really like it. This very dark disturbing tale is a very good crime drama.

The Morning Show (2019 - )
Follows the lives of the people who bring the The Morning Show. I don't really consider those morning shows as "journalism". I mean the shows tend to be very light and puffy, they have like cooking segments and gift guides or whatever. Anyway I suppose that is what the The Morning Show in this series is trying to change by bringing a new host, a reporter who was used to do more journalistic reporting which just creates drama with all the other hosts as they fight for the spotlight. Anyway this series is great. Love the workplace drama and it also has a hot issue as part of the story line and does it well I think. Can't wait for the second season.
Home Before Dark (2020 - )
A young girl and her family moves back to her father's childhood home in a small town after he loses his newspaper job in the city. An aspiring journalist herself, she starts her own newspaper and begins to dig into the unsolved case of her father's still missing best friend who had been abducted as a child. This was surprisingly good. It was clearly made for tweens and teens in mind but still good for adults...sorta like a Pixar movie, it manages the right amount of darkness and heartbreak while still being PG. The young lead actress was very good, though I think they should drop the friends characters, who weren't good enough actors compared to her. Anyway this is what the new Nancy Drew TV series wants to be, an interesting atmospheric mystery. A mystery that is only partway solved in the first season so I'm glad Home Before Dark is getting a second season.
Borgen  (2010 - 2013) (2022 - )
A Danish series following the lives of politicians, press advisers and political journalists. I had heard good reviews about Borgen around the same time as I had heard of The Killing and The Bridge (both Scandinavian crime dramas), and for some reason I had lumped them all together and assumed Borgen was going to be dark and gritty like The Killing and The Bridge...but the politics version...so something akin to House of Cards. It's not actually. It's more of a work place drama and it is very very good, I really enjoyed it. The journalism side of the series is also really interesting. We see the journalists putting up the shows and delivering news about new policies or bills that we had just seen the politicians working on in the scenes before that. Then later all the media and public reactions to it and the experts /pundits coming in to dissect it. The series ended at season 3, but it seemed it has been revived for a season 4 in 2022 which I am so glad about and hope recent events haven't disrupted its production.
---