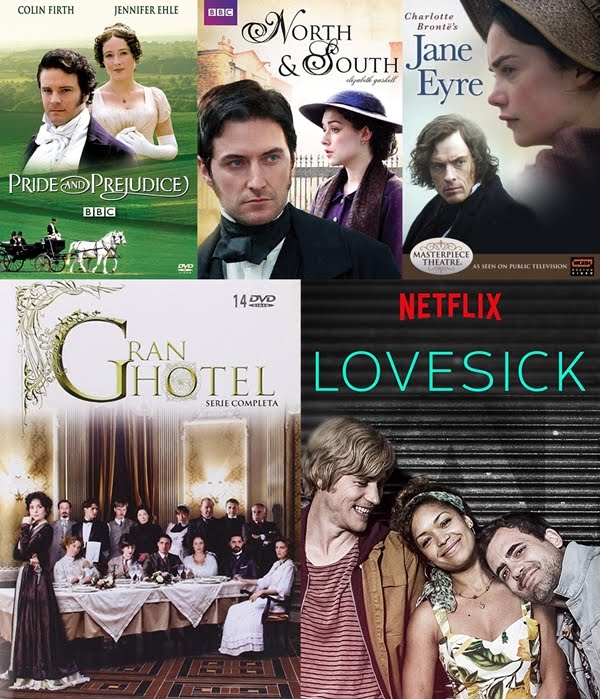 Pride and Prejudice (1995)
I have to include Pride and Prejudice...it is basically one of the earliest romantic comedies. I love this adaptation, because with it being a miniseries, it has the time to get as much of what's on print on to the screen and also this is just so funny. Especially the mother who tries tirelessly to get her daughters out there and Lydia who is just soo silly.


North & South (2004)
I absolutely love this. If you like Pride and Prejudice, you might want to check this out as it has the whole love/hate thing. But that's where the similarities end. This is set against the backdrop of the industrial revolution where some of the characters are dealing with workplace safety and labour issues so the tone is much bleaker, so yeah this is not a romantic comedy, more of a romantic drama. Still despite the general bleakness, it is a beautiful miniseries; great score, gorgeous scenes of cotton floating in the mill and the chemistry between the leads is just electric.

Jane Eyre (2006)
I seen three TV Jane Eyres and this is still my favourite of the TV adaptations. Ruth Wilson is perfect as Jane. And with this being longer than a movie we get to see more of the flirty side of Rochester.

Gran Hotel (2011 - 2013)
Set in 1905, the series follows a man as he gets a job as a waiter at a grand hotel to investigate the disappearance of his sister who had been a maid. This is a lot of fun to watch. It's like a mash up of Downton Abbey and Gosford Park, with the whole upstairs and downstairs thing, but with more drama, romance and mystery and little comedic elements sprinkled in as well.

Lovesick  (2014 - )
I thought I've picked this before but apparently not. Anyway I love lovesick and it turns out to be my only pick with a contemporary setting. It's this sweet funny romantic and also friendship comedy about a guy who is in love with one of his best friends but just doesn't have the guts to tell her because he's afraid it'll ruin their friendship.