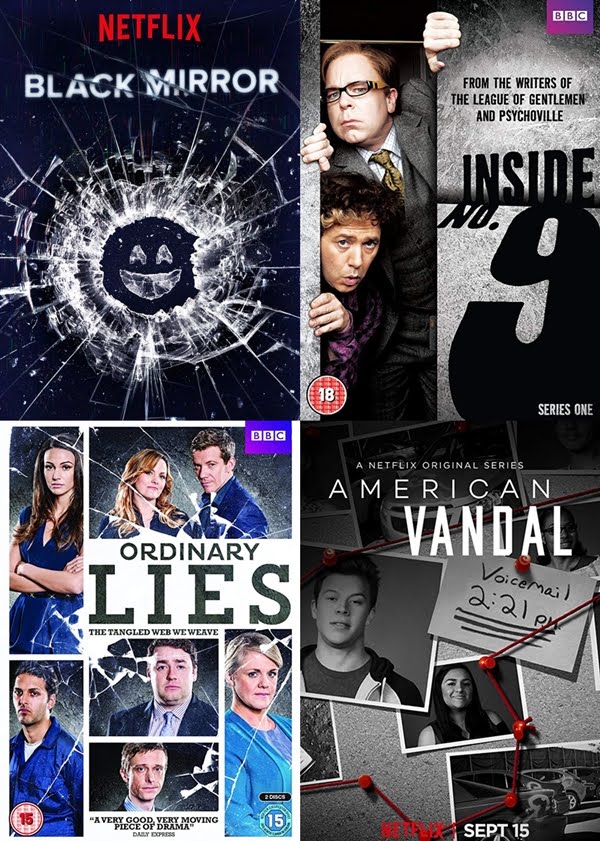 Is it me or are anthology series quite trendy right now; I can probably name about ten or so currently on the air. In the past horror anthologies seem more of the norm, now there are more from other genres. My picks today are 4 of the more recent anthologies I've seen.

Black Mirror (2011 - )
Black Mirror the technology horror anthology, it has a new story each episode, is probably one of the buzziest anthology series in recent years. Like most, I only manage to watch it when it was available on Netflix and I did not like the first two episodes. They were sooo dark and bleak that I took a very long break before coming back to it again. The good news is I did like the next couple episodes much much better. I still have yet to watch everything, I think I can only consume a couple of episodes every few months, but my favourite so far is The Entire History of You.

Inside No. 9 (2014 - )
A British anthology series that mixes dark humor with crime and horror with a new story each episode all taking place at various "No. 9" addresses. I've only seen the first season and it is quite good. They all seem to start funny at least up until the first half and would turn subsequently very very dark.

Ordinary Lies (2015 - )
Another British anthology series. This is more of a drama with each season set in a new work place as we follow its employees through the course of their "ordinary" lie in their personal/work life. I really enjoyed this series and am hoping there is a third season.

American Vandal  (2017 - )
A true-crime satire, this series follows two teenage filmmakers as they explore a new mystery each season. The first season is the only one I've seen and it is so so good and funny too; it has the two teens following the aftermath of a prank at their high school that left twenty-seven faculty cars spray painted with drawings of penises. The second season was released earlier this month and I'm hoping it is just as great.