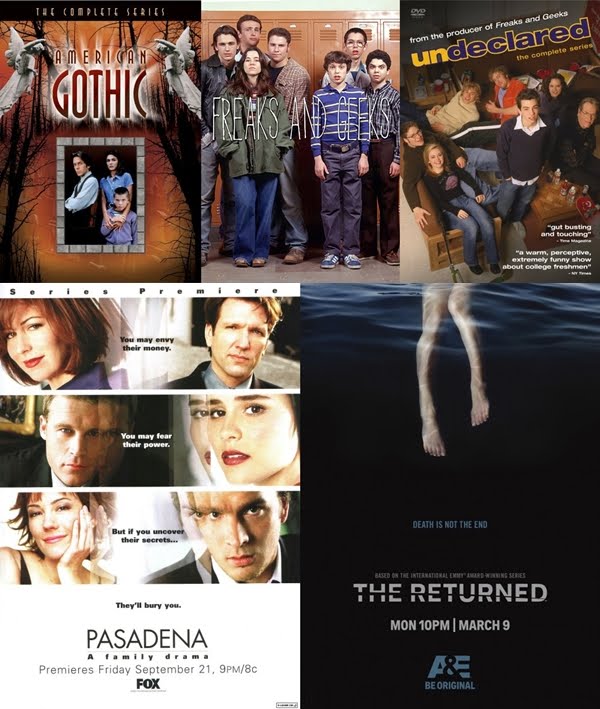 Hey, it's my favorite Thursday of the month: the TV edition! This week it's TV shows that unfortunately did not get renewed which always sucks when the first season ended with a cliffhanger. Most of my picks today are series that are more than 15 years old, so my memory of them is very poor, but I did like them and had wanted to see a second season.

American Gothic (1995-1996)
I remember this as being very creepy. Most of the plot escapes me now just that it had a scary sheriff, a sort of devil-like character with supernatural powers, trying to control a young orphan boy who has a very thick southern accent.

Freaks and Geeks (1999-2000)
I re-watched this recently and I think it has aged very well. Still found it very funny. What sets it apart from most teen shows is its focus on the "freaks and geeks", none of the main characters are the popular kids. Such a pity it did not get a second season.

Undeclared (2001-2002)
This was the other Judd Apatow series that got cancelled after one season, this time a college series that was just as funny and had some of the cast of Freaks and Geeks.

Pasadena (2001)
A teen girl discovers her wealthy family may be hiding some terrible secrets. The thing I remember most is that there was something that was left unresolved in the last episode and I had so wanted to see a new season only to learn that it had been cancelled.

The Returned (2015)
A remake of the French series, which I heard was better, about deceased locals returning. However, I had not seen the original so I can't compare. I thought this remake was a decent series, much better than the other series with a similar premise that had aired about the same period - Resurrection. The Returned ended with things starting to go wrong and with no explanation yet why the deceased have returned, so I was very disappointed when it was not renewed.