Monthly Book Picks: The Month of January and February 2018

Hey, if you have read my blog the last month or so you may have heard me talking about starting a Monthly Book Picks where you select your favourite reads of the last month; so here it is. Since I missed January, I'll be doing both January and February picks this month. If you want to join in do leave a link using the inlinkz gadget below. Monthly Book Picks will go up every first Monday of the month. 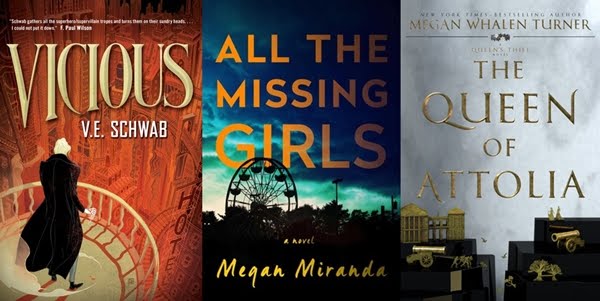 “There are no good men in this game.”

Vicious (The Villains #1) by V.E. Schwab (2013)
The Gist: College roommates become vicious enemies after developing superpowers through their science experiments. Ten years later, one of them has come back to execute his revenge.
Imagine The Prestige movie but instead of magicians it's people with wicked superpowers. I had high expectations going into this because it has a high rating on Goodreads which was definitely met and Vicious has become my one of favourites. It has great writing, plot, pacing and fascinating characters. If you're tired of the usual superhero fare, as the quote above implies, there are no heroes here.  I can't wait for the sequel and the film adaptation which I'm surprised has not come sooner.

“There was a small part of me that was still childish, stubborn in her hope, thinking I could somehow have everything. ...That I could be all the versions of me, stacked inside one another, and find someone who would want them all. But that's childhood. Before you realize that every step is a choice. That something must be given up for something to be gained. Everything on a scale, a weighing of desires, an ordering of which you want more--and what you'd be willing to give for it.”

All the Missing Girls by Megan Miranda (2016)
The Gist: Nicollete has returned to her hometown for the summer to help her brother fix their old house so that they can sell it to use the sale money for the father's nursing home expanses. Then her father, who has dementia, starts saying that he has seen the disappeared girl on their porch, only he has not been to their house a year since his nursing home stay and which girl was he referring too? Nicollete's best friend who disappeared ten years ago or the latest girl that has gone missing, their neighbour. Told in reverse, the link between the girls is slowly revealed as the past resurface.
This is actually my second reading, I loved it on the first read but it being a mystery told in reverse and with a first person narration,you know how unreliable they all are, I knew I was missing a lot of the breadcrumbs the first time around. And yes this is definitely one of those stories/books that you'll continually discover new things you missed before. I also love the writing and the narrator's voice that has a certain reflective wariness to it. Overall just a satisfying suspenseful mystery, one of the best I'd say that I read the last year or so.


“Power. What men like best for themselves and least in their women.”

The Queen of Attolia (The Queen's Thief #2) by Megan Whalen Turner (2000)
This is the second book in the YA fantasy series The Queen's Thief. The first book The Thief is about a thief who claims he is able to steal anything so he is recruited and goes on a journey with the king's scholar, a soldier and two apprentices to recover a treasure. The first two thirds of the first book, for me, was boring. But the last third was excellent. In the second book, The Queen of Attolia, the thief this time is enlisted more for stealing information and that really is all I can say lest I spoil the first book. Also that, unlike the first book, it is great from the start. It has action, drama, political intrigue with plenty of twist and turns and even has a little romance. I love The Queen of Attolia more, but you definitely can't jump to reading this without reading the first book and all the essential world building.


If you are participating be sure to add your blog post to the linky widget below (Enter your Blog Post URL, your Blog Name and your email {which will remain hidden}). Please also visit the other participating blogs, spread the word about this series, and also link back to my blog on your own Monthly Books Picks post :)