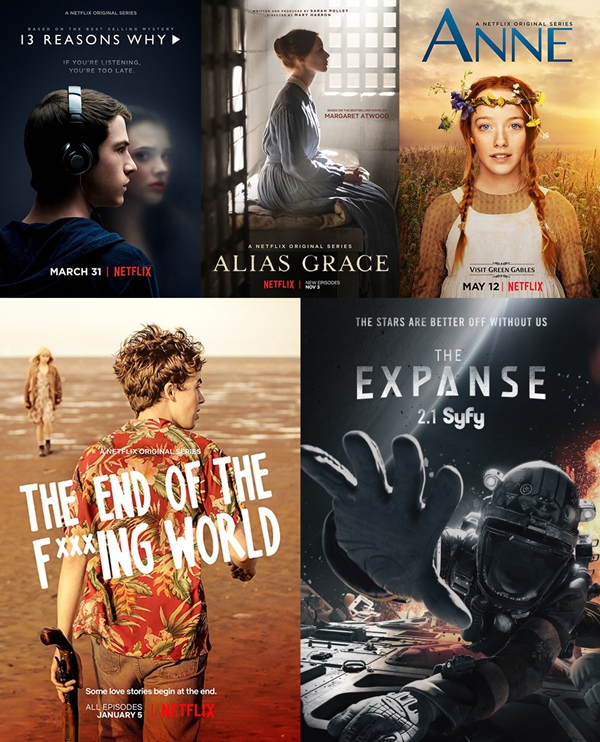 I love these TV Editions, but I don't know about you, for me they can be quite a challenge to come up with picks as I don't really keep a list of TV shows I've watched like I do with movies. Anyway today I'm picking recent TV shows that I've seen that I like that were also based on a book.

13 Reasons Why (2017 - )
Based on a YA book it follows Clay as he uncovers why his crush, Hannah, committed suicide by listening to a box of cassette tapes she left, a sort of lengthy suicide note, her 13 reasons why she did it. It actually took me a long while to get to this series because first the controversy/buzz or whatever surrounding this was just so tiring. Second, while it has been some time since I read it, I do remember not liking the book at all. The series is better I think in that at least we get various other perspectives other than just Hannah. The negative on the TV series is that they stretched the whole thing into 13 episodes of Clay (if I'm not mistaken in the book he only listened to all the tapes in like a day or two) running around for what seems like days and weeks asking his classmates to talk to him instead of just listening to the damn tapes...which was so nonsensical. Now this series is getting a second season which I was like what? But it has diverged quite a bit from the book, so it could be interesting to see what they do with the other characters.

Alias Grace (2017)
Based on a Margaret Atwood novel that is based on a real woman, it follows a young woman, Grace, in 19th Century Canada serving a life sentence for murdering her employer and his housekeeper and the psychiatrist who has to evaluate if she is mentally ill so that a case can be made for pardon due to insanity. This series is just so well made and well told. Grace the main character tells an enchanting haunting tale of her life and the events leading up to the crime. Whether the story she tells is the truth, something she thinks is the truth or something she believes people want to be the truth, we'll never know because in reality, I don't think anyone ever did know.

Anne with an E (2017 - )
Based on Anne of Green Gables about a young orphan girl adopted by two elderly siblings who live on Prince Edward Island. I have to say, I hate the title, why can't they just stick with Anne of Green Gables? Anyway I love the 1980s TV series, so I had been looking forward to this and I'm glad to say I love this one too. Now I've not read the book, but I've heard that Anne with an E is much darker than the book, but since I've seen the 80's series, I can definitely say this new one is soo much darker than that. A lot of the times it doesn't even seem like it was ever a TV series targeted for children like the books were. I would describe Anne with an E as a more Jane Eyre-esque Anne of Green Gables, which I'm totally fine with because I love Jane Eyre and it does give Anne more depth instead of being just the annoying talkative dreamy girl.

The End of the F***ing World (2017 - )
Based on a comic, it's about two teens, a boy who thinks he's a psychopath and the other, the new girl at school, who run away together so that she can search for her real father. I really really enjoyed this one. It's very dark, sharply funny and is a very short series. My guess is, there is only one season of this. Anyway I was curious about the comic book, from the reviews of it, it seems it is a lot darker without any of the humor, albeit a dark one, that the TV show has.

The Expanse (2015 - )
Based on a series of sci-fi novels, this is a show I think most won't watch because the series airs on  SyFy in the U.S. and SyFy isn't exactly known for putting out quality stuff. But this, is the exception. The world building is great with good production value and the story is complex and keeps getting more so, that I can't even give a one line plot summary. I'd say take a chance and watch one episode, it quite possible be the best sci-fi TV series in recent years.


Participating Blogs/Bloggers
Posted by Wanderer at 5:00 AM