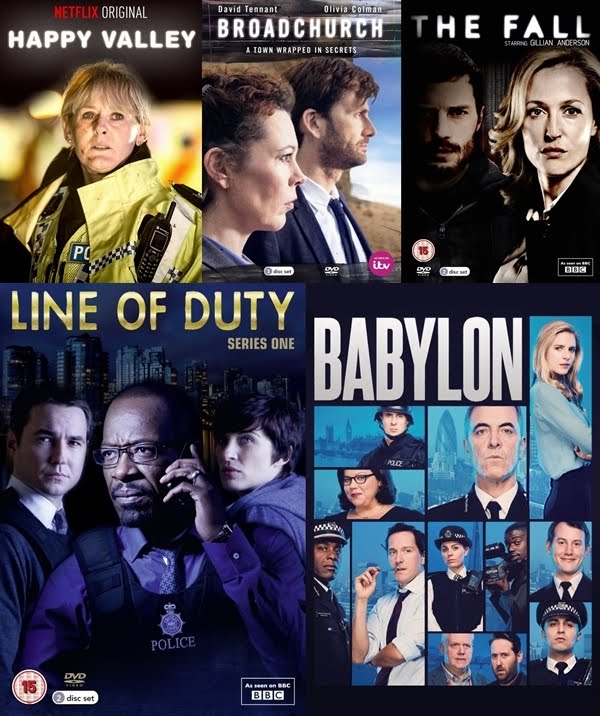 The last Thursday of the month has really become my favourite because I love TV too. This week's theme is Police. Since I've been watching quite a lot of UK series lately, my picks are all UK police shows.

The title doesn't sound attractive...but I heard such good things about this series so I gave it a try and it really is very good. Well written and has interesting characters. The lead is a middle age female uniformed police officer, and there right there is not something you often get. One thing I noticed about the UK police series is that besides the main crime that we follow, they also show the officers deal with the mundane everyday duties of paperwork and disturbances in the neighbourhood; I think that adds a lot to the world of the show.

Broadchurch (2013 - )
This series had such a successful first season that there was an American version made called Gracepoint which apparently wasn't as well received because it was never renewed. Anyway the first season of Broadchurch was excellent. The gist of the story is a young boy from a small coastal town was found murdered, causing a media frenzy as the police try to solve the case as quickly as they can. Another thing I noticed about UK police dramas is that they usually have one story arc for the season which is usually a short one and I think I prefer this format. Also while they do go through the whole investigative aspect, they also deal a lot more with what a crime does to the family and community.

The Fall (2013 - )
A talented detective from the MET is brought in to review a case which she soon finds similarities to another recent one; it seems they have a serial killer on the loose. Another excellent series. Jamie Dornan in some of the stuff I've seen him in is very wooden and blank, but here he is very good. Gillian Anderson stars as the detective and she too is just great. Her character is the silent strong type that is smart, determined but also has a sort of fragility about her. I love that there were a lot of scenes of just her changing outfits every time she has to meet the press or different superiors because she knows women are scrutinized much more about what they wear than men (like men can wear the same dark suit and no one would notice). That is just one of the astute social/gender observations the series made.

Line of Duty (2012 - ) A team of anti-corruption officers work on solving a series of linked cases. Unlike the above series, this one is a little more fast paced. Working as a police officer just seems a lot more brutal here, and I'm not just talking about the crimes...but the office politics. I like how all the cases from the different seasons are linked as we get deeper and deeper into the corruption that seem to have very long arms.

Babylon (2014)
This was my most recent watch. I think there is only one season which is a pity because I really enjoyed it. The show follows a PR team for the Metropolitan police as a new PR consultant (played by Brit Marling) from the US is hired to lead it, to help improve the image of the police and also follows two teams of officers on the ground. It's a little like In the Loop with not as much vulgarities. It's also fast paced and darkly funny.


Participating Blogs/Bloggers
Posted by Wanderer at 4:37 AM