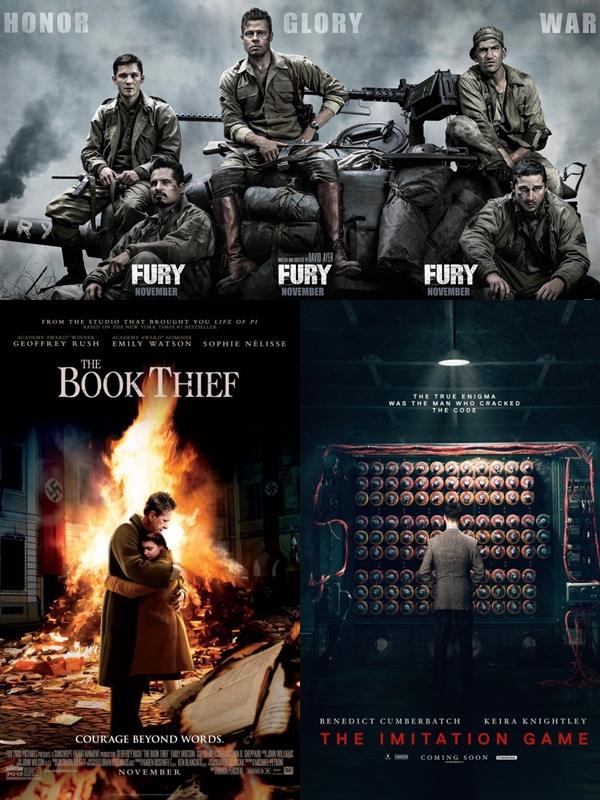 I just generally don't go for war movies, but this week was a little better than the previous World War 1 theme in that I have a slightly larger pool of watched films to pick from. I'm just going with 3 of my most recent watch.

The movie follows a tank crew during the last few days (or was it weeks?) of the war in Europe. I can't think of any other film that ever gave the perspective of a tank crew or the role of tanks during a war, so that was interesting. Although the way the interior of the tank was shot made it seem a lot roomier than I think it actually was.

The Book Thief (2013)
Based on a very popular YA novel, I was looking forward to it. It was underwhelming. I haven't read the book so I'm not really judging it as an adaptation. It's just the story is narrated by Death, and as we are to believe it to be so, I don't think the film (maybe the book did a better job?) quite show us why this girl's story stands out from all the rest in the whole human existence. I can see how her story would appeal to book lovers in that she is totally badass stealing books that were banned but I'd imagined Death would have seen more people that had to make extraordinary choices and led extraordinary lives.

Underwhelmed by this too. It just feels Oscar baity.