This post is linked to Stacking the Shelves (hosted by Tynga Reviews)  and The Sunday Post (hosted by Kimba @Caffeinated Book Reviewer). 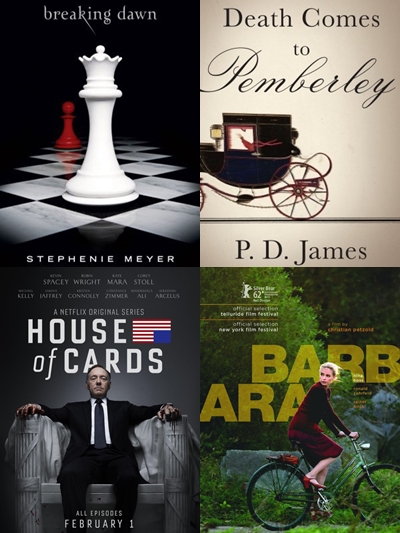 Breaking Dawn
I finished reading the other books in this series years ago and it is only now that I have finally completed Breaking Dawn. I have made it nearly halfway at least twice before and was so determine to complete this series (because I've completed few series) that for the third time I took to listening to the audiobook. I actually like Twilight when I first read it but the subsequent books not so much. Maybe it's the criticism of the series as a whole that has affected me or maybe Breaking Dawn is simply just bad. Because I do find Breaking Dawn pretty bad. It's just so long and draggy.

I was never crazy for Edward but now I can no longer stand him. He is just so over protective and always hovering and all tormented by what he is. Why does Bella like him? He's good looking and that's all I'm getting from the books. Do they have conversations about anything? Bella as it turns out, become a perfect vampire, and who everyone looks at with wonderment because of how perfect she is. They look Reneesme the same way as well. Can everyone stop being perfect? Here's another annoying bit...other than the vampires perfectness, Meyer over does it on their strengths and their seemingly in-destructiveness. As for Jacob, he always play the hurt card...just stop the pity party already. Either leave or stay and suck it up. And Bella can she stop stringing Jacob along? Even the rest of the Cullens, their appeal has waned. Now they always seem to be there at every turn all goodness and pure. They used to be interesting with the superpowers, not anymore when every other vampire seem to have a superpower of their own. I so dislike how the other vampires were introduced.. We've heard nothing about most of the Cullen's vampire friends in the previous books so it was annoying just how game they all are to stand by the Cullens. Of course each one more exotic than the other with super cool powers.

Then we come to the big the supposed high stakes battle that everyone was preparing for...how anti climatic it actually turns out. No one gets dirty and brutal, no one had to make hard choices and confront whatever they think they are or stood for. I hate it when we are presented with a high stakes scenario and yet it doesn't follow through with any casualties. I'd say just watch the movie if you were thinking of reading this, at least there was more action.

Death Comes to Pemberley
It's been a long time since I've read Pride and Prejudice, possibly what I remember of it comes from the two adaptations which I have watch many times, I interpreted Pride and Prejudice as a social commentary that is often humorous. So despite the title Death Comes to Pemberley suggesting a more ominous premise, I thought it would still be witty. Rather than be a satire about marriage, wealth and courtship like in Pride and Prejudice... I had thought it would take a stab at death...what a dark comedy it would be. But no, Death Comes to Pemberley is quite serious; unless I really miss the irony and humor. Which makes the book disappointing even though i's filled with most of the characters of the original, the characteristics of some of the characters have not been retained. Lizzie isn't quite as quick witted and seems to have lost the sharp tongue of hers. Most changed perhaps is Colonel Fitzwilliam. Although Death Comes to Pemberly does try to give an explanation for the change, still he is so different from the Colonel in Pride and Prejudice where he was pretty charming especially compared to Darcy. As for the story, it does stick with what Pride and Prejudice had which includes a scandal involving, who else but the rake Wickham. Similarly everything is fixed by the cleverness of a relative who does not want the doings of Wickham to mar all those that are connected to him by blood and law.

House of Cards - Season 1
Some of my thoughts for season 1 which I just finished watching. Beware of some minor spoilers.

Barbara (2012)
I love quiet subtle drama and this one is really good. In 1980's East Germany, Barbara is a doctor banished to work in a clinic in the country after applying to get an exit visa so that she can join her boyfriend who lives in the West. At the new clinic Barbara separates herself from her colleagues knowing everyone could play a part in her surveillance and can be tapped by Stasi to provide a report about her. Still her seperateness could also raise suspicion that she has something to hide. Barbara has to constantly be on guard with what she says, does and not do, and also has to endure the routine check ups by the Stasi's. There's always an air of danger in the quiet country as if something terrible is about to happen as Barbara goes about the normal duties of a doctor. Has someone turn on Barbara, has she been too careless or have we become paranoid for her as well?


Wednesday:  I took part in Wendell's Back to School Movie Blogathon. The game was to cast movie characters in a few school archetypes like jocks, nerds and so forth. Check out which characters made my class.
Thursday: Thursday Movie Picks #9 was Sports Movies.I'm not a big fan of sport movies but I do have some that I enjoyed. Next week's theme is Movies about Childhood/Young Love. So if you love movies, come and take part in this weekly series. You can read about future topics here.