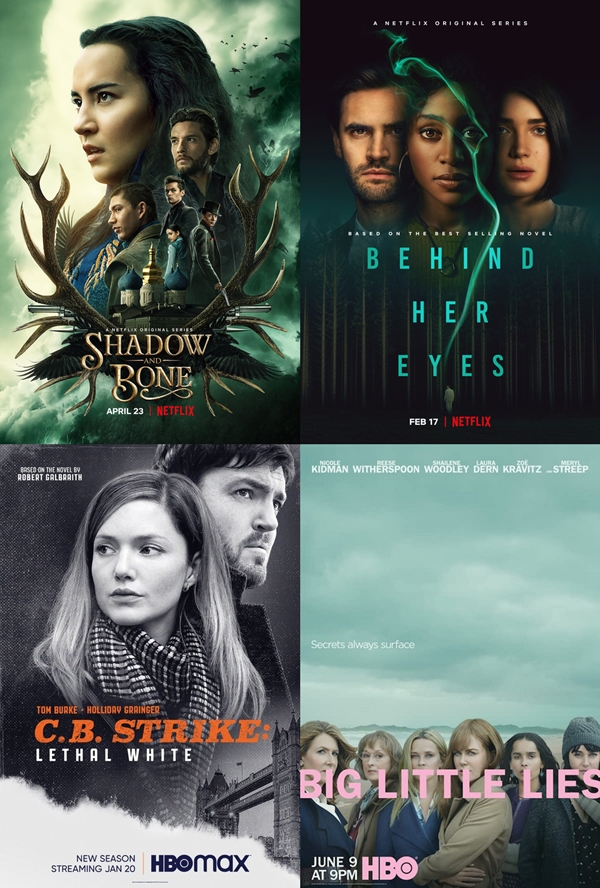 This is one of the themes that I have every year since there are always new book to TV adaptations each year. I am truly spoiled for choice and will be picking the ones I like that I've seen since last year's adaptation theme and ones that have never picked picked before (which would exclude The Flight Attendant and Defending Jacob since I have picked them before).
Shadow and Bone (2021 - )
I can't really do a plot summary for this...there's quite a lot going on. It's basically a YA Fantasy that I've been wanting to read for some time but never got around to, so I had been looking forward to the TV adaptation. The TV series is great. The world building is big and wonderful. The production value is impressive which I did not expect for a YA fantasy TV series and I think it is as good as or better than some of the YA movies that have come before. I also like the characters and their relationships, so there's much to look forward to in the second season. The only negative is, with it being a fantasy series, we'd probably have to wait quite a long time for a second season...my guess maybe only in 2023?
Behind Her Eyes (2021)
A young single mom starts to fall for her boss just as she also starts to become friends with his wife. This is the only TV series that I've read the book, back in 2017. I read quite a lot from the mystery/suspense/thriller genre each year, most of which I have forgotten their plots, because after so many, a lot of them sort of seem similar and they all blend together. Not this. This I remembered not because I love the book but because of how nutty it was. And turns out I enjoyed this adaptation. All the craziness made this a fun watch and the adaptation also managed to have this effectively spooky ominous tone.
C.B. Strike (2017 - )
Based of the series of books by JK Rowling where she writes under the name Robert Galbraith about an ex army Military Police turned private investigator, Cormoran Strike, solving cases with his assistant, Robin. This is a mini series and each season is very short consisting of between 2 to 4 episodes covering between 1 or 2 books they were based on. Keeping the seasons short is good in my opinion as it doesn't unnecessarily stretch out a book across soo many episodes. I really like this series. While the cases they work on are interesting enough, I think it's the two main characters that keep me watching. Each of them is a little weathered and bruised by their own past but they have such great chemistry and work together so well. Cormoran brings his years of investigative experience as an MP to solving their cases while Robin brings a second perspective and optimism. I hope this gets a fourth season as the 5th book in the book series which was released last year has yet to be adapted.
Big Little Lies (2017 - 2019)
Follows the months and weeks of the lives of a group of women from a rich neighbourhood leading up to a murder. I like how the mystery plays out, how even the victim was never fully revealed until near the end; throughout the first season there were short bits of witness interviews spliced in between the drama of these women's lives, so the characters that were never interviewed could have been the victim and everyone could have been the killer. It was also a very star studded production and everyone was really good in it.
---