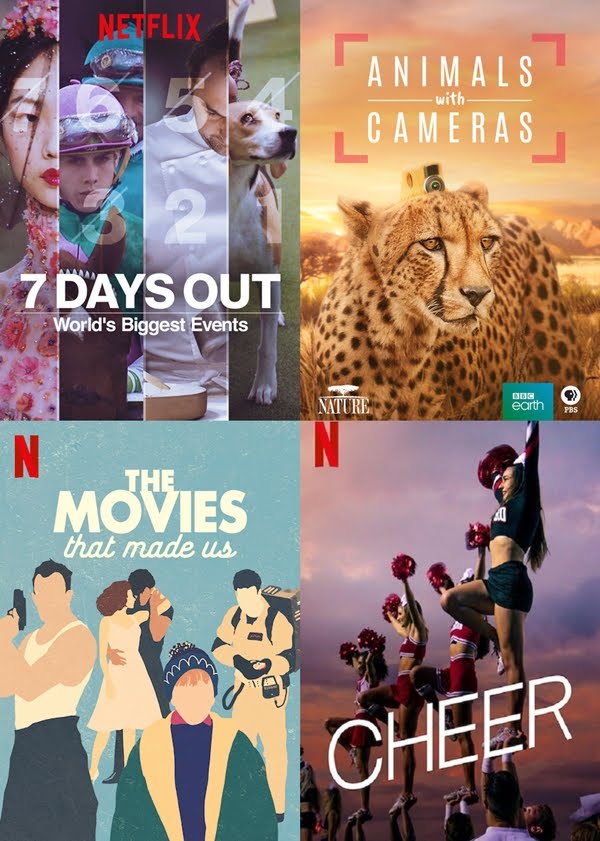 There will never be a Documentary Feature TMP  because I rarely watch any, but documentary series, I definitely do watch them, well because I watch more TV than movies. So if it's on TV as I am flipping channels, I might just continue on watching. I prefer history docu series or the theme within a theme I'm going for this week which are docu series that does "making of" or "behind the scenes" look at something.


7 Days Out (2018)
Each episode follows groups of people which may be employees, organisers, participants or competitors and gives a glimpse at the behind the scenes stuff for seven days leading to an event. I absolutely love this series and I hope they do more. The first season covered the Westminster Dog Show, a restaurant reopening, a NASA mission, a Chanel fashion show, the Kentucky Derby and a pro video game tournament. If you've ever played a sport or organise an event that involves a lot of people, where there is a lot of work that goes on for months and days leading up to the actual event, I think you'd relate and enjoy this.

Animals with Cameras (2018)
The series follows camera specialists as they work with scientist to fit cameras to wild animals to give a truly unique animal's perspective of the world around them. We get to see the team go through a lot of trial and error to make a camera just the right size for each respective animal, in the case of a meerkat it was very small, and to find a way to fix it on them in the best way possible. If putting a camera on a land animal is hard, an aquatic animal seems a lot more challenging as in the case of the devil rays, but the footage of a group of devil rays migrating that came out off it was just magical to look at.

The Movies That Made Us (2019)
The thing I miss most about DVDs and Blu-rays are the special features. I love seeing how movies get made. Which is why I love this series and once again I hope they do more of it. The first season looked at Dirty Dancing, Home Alone, Ghostbusters and Die Hard. I thought the series presented the making of these movies in such a fun entertaining way. And I do think it goes beyond the usual info in special features that comes with DVD which usually just have interviews with the director and actors and maybe sometimes the screenwriter, composer or costume designer. This series actually has few actor interviews and instead talked mostly to the behind the scenes people like the producers, the screenwriters, special effects people, casting directors, etc and they talked about studio changes, writer changers, title changes, cast changes, etc the kind of stuff that probably would never have ended up on a DVD special features since DVD special features tend to be more promotional and rosy. Anyway I just found it all fascinating.

Cheer (2020)
Cheerleading isn't a thing here, so the only cheerleading I've seen are in movies like Bring It On or on teen TV series but those of course are just actors. So when this series came up on Netflix, I thought sure why not. I wanted to see real cheer stunts. It's a pretty good series that gives a look into competitive cheerleading as it follows a college team as they train for a competition. The team isn't really one that does those sideshow cheers at other sports games. Cheerleading is a sport in itself and so this team's stunts are much more acrobatic, death defying and as such amazing to look at when they pull it off perfectly; some of those stunts looked like as if the film reel is playing in reverse even though it's not. Yet you really wonder why anyone would go through months of painful training because it really looks just so painful, even when they do the stunts perfectly and of course worse when the stunt fails. I suppose it can be argued that most sports causes pain and injury, but the difference being that unlike other sports there is no pro teams or leagues in store for the cheerleaders to actually make a living other than being a coach. All the risks and injuries with very little reward...which reminds me of a fictional drama TV series called Dare Me where a doctor is examining a cheerleader that had just sustained an injury after a terrible knock to her face when a stunt went wrong, and he says something like "at least football players have helmets".