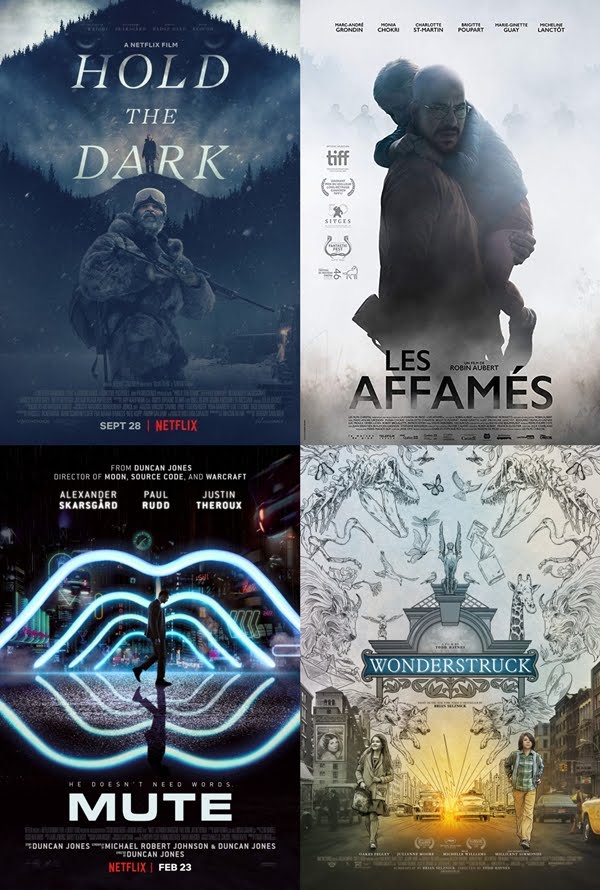 This is a hard theme for me because I haven't seen a lot of 2018 films so I'm sticking with those I've seen on streaming services that were disappointing and/or could have been better.

Hold the Dark
I've picked this one last week. As I've mentioned, the plot sounded so interesting but it ended up being a disappointment. I think it's because the story explains nothing. All we get are that these characters are just messed up and had been holding off the dark until it all exploded. If they at least touched on the why now...perhaps the story could have been better.

Les affamés
The gist: The movie follows survivors of a zombie apocalypse in a small village in upstate Quebec. I think I'm experiencing zombie fatigue. I blame it on The Walking Dead which drags out storylines pointlessly (I've given up on it since last season). Anyway this one is really quiet and slow burning, which I often like in movies, but here I found it quite dull.

Mute
The gist: A mute bartender goes up against gangsters to find his missing partner. This is said to be set in the same world as Moon, in fact you can see a news clip of a court trial featuring the main characters in Moon in the background in one of scene. I love Moon and Mute had a good cast so I had expected this to be great, unfortunately it was a little disappointing. The thing is Moon is science fiction film set in the future exploring scientific progress and the human cost. Mute, while it is an ok crime drama, just happens to be set in the same futuristic world but has little do with science. It might has well has been set in the present day.

Wonderstruck
The gist: Two children, a girl and a boy, separated by fifty years, runs away to New York City. This is a movie based on a book by the same author that wrote Hugo. There are similar elements in this one as well like silent movies and orphan children.Wonderstruck follows two different children and I would say the story of the second child, the boy, is much more satisfying and has wonderful diorama scenes at end. The first story is told in black and white and without spoken words other than the score, because the girl is deaf (but the boy is also deaf and his story has sound). My guess is this was done to remain loyal to how the girl's story was told in the book? Anyway I don't think it was quite a smart thing to do considering this is a movie based on a kids book targeted at kids. I mean how well would a kid take a movie that is half silent and without color? My guess not well especially when the girl's story is also overall just a lot duller than the boy's, without any friendship and adventure element. So yeah, I would say an uneven movie.