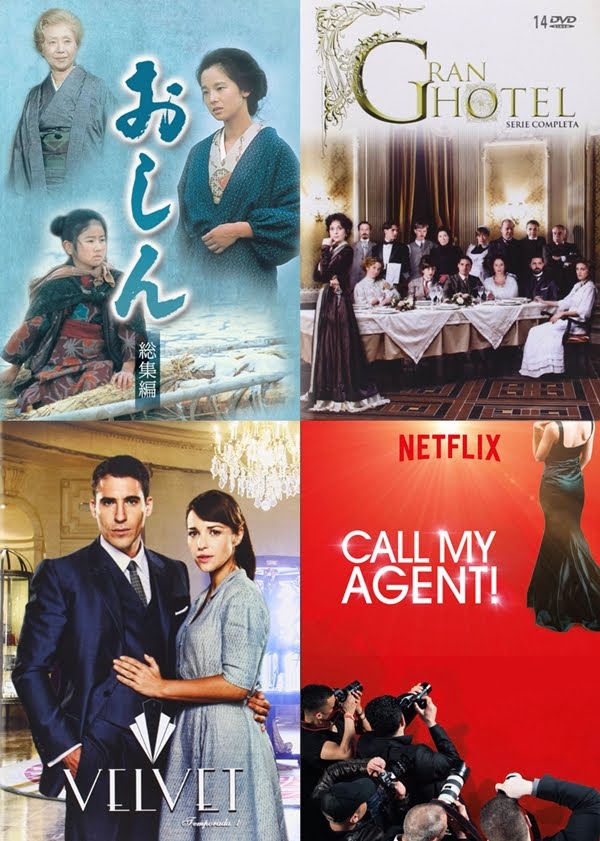 So it's the last Thursday of the month and today's TV theme is Non-English TV shows. I've been looking forward to this week because I've watched a couple of good series and am keen to discover more. Here are four that I like.

Oshin (1983 - 1984)
Before Korean dramas was everywhere, there were Japenese dramas. Oshin was probably the most popular Japanese drama in my part of world and from what I've read, its success was worldwide too. Oshin was basically just one long season of short episodes (there were 297 epsiodes)...I think it was probably aired daily in Japan, although when I saw it, much later of course, the episodes were combined into half hour or was it hour long episodes which we were more accustomed with. The show follows the life of a Japanese woman, Oshin, from 1907 as a young girl when she was sent to work as a nanny to support her family up until 1983.

Gran Hotel (2011 - 2013)
I first heard of this Spanish drama by way of a recommendation, something like: if you like Downton Abbey, you'll love Gran Hotel. I agree and dare I say, I think Gran Hotel is a much better series. Downton Abbey was good for about 3 seasons but fell off a cliff afterwards while Gran Hotel was a much consistent show. Set in 1905, Gran Hotel follows a young man as he gets a job as a waiter at a grand hotel to investigate the disappearance of his sister who had been a maid there. Gran Hotel I'd say is a mix of Downton Abbey and Gosford Park, it's a drama, romance, with a mystery whodunnit  as well as a little bit of comedic elements which just makes it a very fun watch.

Velvet (2013 - 2016)
Another Spanish drama. While I've seen only two seasons, I really like what I've seen. This one is more of a romantic drama; set in the 50s/60s it's about the people working at a fashion house, notably the return of the heir after being abroad and his relationship with a seamstress, his childhood sweetheart. This one also has some comedic elements; these Spanish dramas are just really fun to watch.

Call My Agent! (2015 - )
Set in Paris, it centers on a talent agency as its agents juggle meeting the demands of their clients and trying to figure out the future of the agency when their leader dies. I've only seen the first season and I really enjoyed it; it has a sharp humor and getting a glimpse into what an agent does was really interesting. A fun thing the series does is that the agents' clients are all actual actors playing fictitious version of themselves. While I'm not familiar with those that appeared in the first season, the second season it seems have more international actors like Isabelle Adjani and Juliette Binoche as the clients, so I'm definitely looking forward to the second season.


Participating Blogs/Bloggers
Posted by Wanderer at 4:00 AM