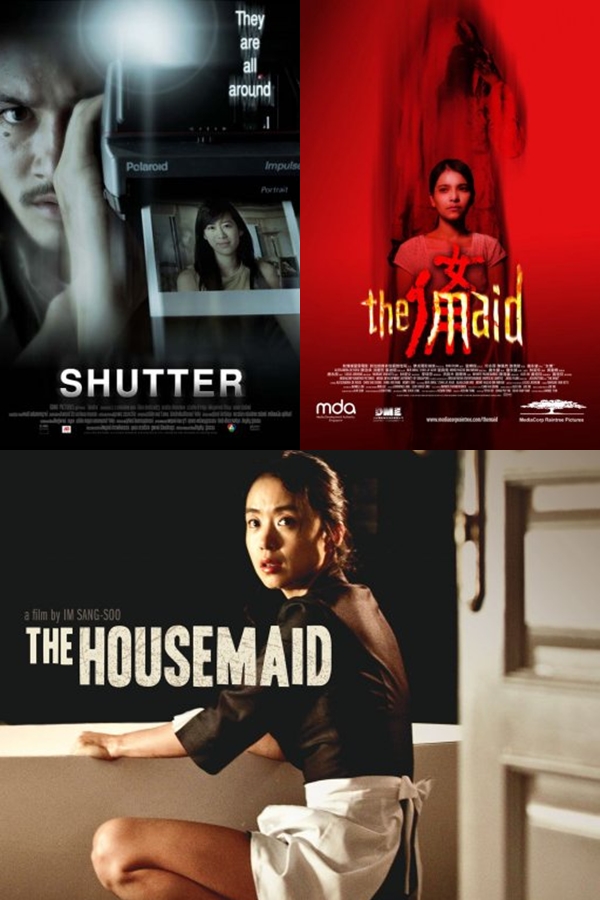 
Hey welcome to another TMP Halloween Edition. This week it's Asian Horror! I don't know if it's true or I'm just imagining it, but has there been fewer Asian Horror released recently. Or at least if there are still as many, they just don't get as much attention? I haven't seen one in a long time. Asian Horror used to be big in the late 90s and early 2000s; all the major hits were getting American remakes. Now it's quiet. Anyway here are my three picks; at least one is recycled but I can't resist.

Shutter (2004)
A photographer and his girlfriend starts noticing mysterious shadows in their photographs after an accident. They start investigating and turns out that the photographer's friends too have such similar photographs; they all share a dark past. Love Shutter. It was remade in 2008. The remake was not as spooky and tragically sad as the original, and it made some odd choices with some of the changes.

The Maid (2005)
Not a lot of local horror movies have been made; this one is really the only one I've seen and I like it. Creepy and I did not guess the twist. In it a young Filipino woman, Rosa, comes to Singapore to work as a live in maid for a local family and arrives on the first day of the seventh month of the Chinese lunar calendar where it is believed the gates of hell are open and spirits wander among the living. Her employers advises her on the do's and don'ts for the month so as to not to offend the spirits but Rosa makes a mistake and soon spooky things start to happen.

The Housemaid (2010)
Unlike my other picks today, this one doesn't deal with supernatural; it's more of psychological thriller/horror. In the movie a woman starts working for a wealthy family as a maid and nanny for the couple's daughter. She and the master of the house soon begins an affair and when it is found out, things go nuts. Interesting movie. Very modern, sleek, cold and dark. Not quite sure about the end but I'm definitely interested in seeing the original 1960 movie.

Participating Blogs/Bloggers
Posted by Wanderer at 4:20 AM