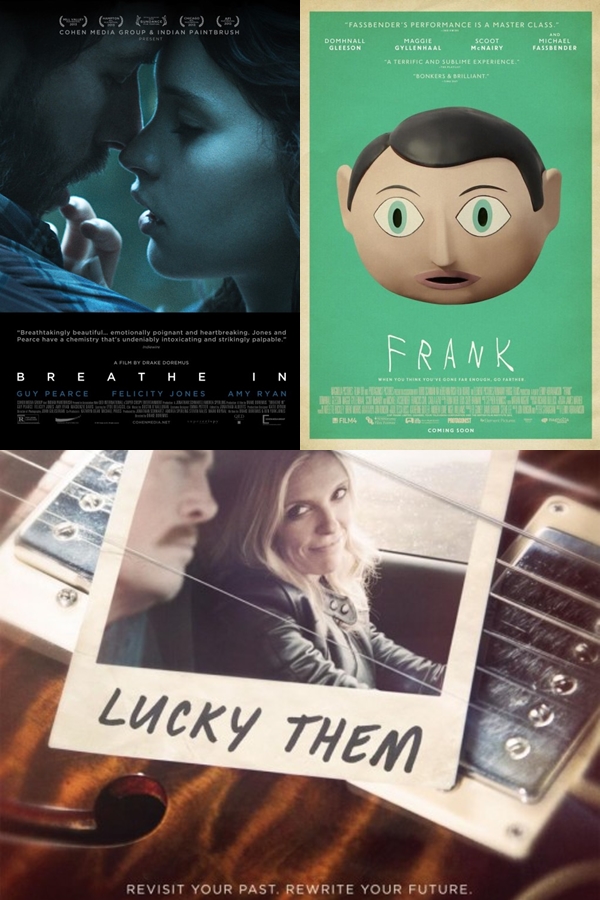 Hello everyone! How has your week been? Well it's another Thursday and today's theme theme is a suggestion from Wendell@DellonMovies. My picks this week are simple, all of them were movies I've seen just in the last few weeks.


Breathe In (2013)
In Breathe In, Sophie's (a foreign exchange student) arrival at her host family home disrupts the family's relationships. The father in the family is a high school music teacher who yearns to play in a big orchestra, but his wife's continued reluctance to move to the city stifles his ambitions. Sophie who turns out to be a talented young pianist uncertain about pursuing a musical career, awakens a desire in the father to follow not only his musical ambitions but possibly also a romantic one. I rather enjoyed this. The tension of the relationships of the characters I thought were great.

Frank (2014)
I really like the first third: Jon struggling to write songs was endearing and when he met Frank and join his band it looked like it could be the beginning of his musical career. I felt like the story became less interesting when they stayed at the cabin. It was one eccentric thing after another. As for Frank, well he is weird as expected,but I'd say less weird than his friends who treats him like some kind of genius. I also had trouble understanding what Frank was saying most of the time, he either sort of mumbles or the mask just muffles too much of his voice. I wanted to really like this movie but I think it's just a little too eccentric for me.

Lucky Them (2013)
In Lucky Them, Toni Collete plays a music journalist assigned to write an article about a rock star who disappeared from the stage a decade ago who also happens to be her boyfriend at the time. Reluctantly she goes on a journey to investigate the mystery for the article and at the same time to get closure on what really happened. I rather enjoyed this one too. It was funny and it was nice seeing Toni Collette playing a young cool rock kind of character instead of the mom-ish characters I tend to see her in.