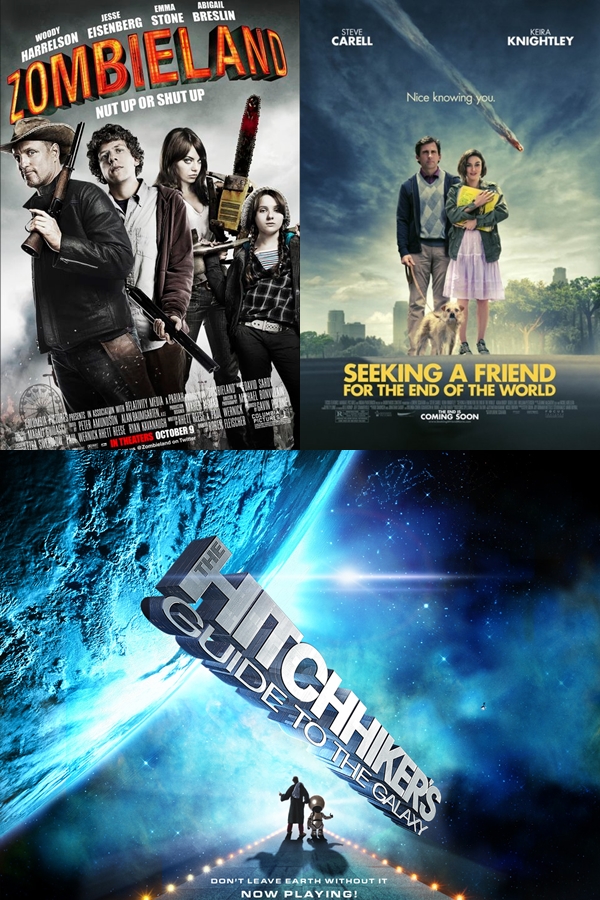 This week is the 52nd edition of Thursday Movie Picks which means it's the one year anniversary!!! Can you believe it? One year? Time flies! Thank you everyone who have ever participated for making Thursday a day to look forward to.

Now back to regular programming; this week's theme was suggested by John Hitchcock @ HitchcocksWorld. I thought I'd have a little fun and make it another theme within a theme; I'm picking apocalyptic end of the world road trips. I mean have you notice how many people in movies go on road trips when the end is near? Quite a number.

Zombieland (2009)
So I'm pretty sure I've picked Zombieland in previous week's before but it is the perfect pick for this week! A college student travels across country to see if his parents made it through the zombie outbreak and meets a man determined to find the last Twinkie. Their paths cross with two sisters who have been conning through life and now the zombie apocalypse to go to an amusement park. Fun zombie comedy.

Seeking a Friend for the End of the World (2012)
In this one the end of the world comes in the form of an asteroid that's about to make Earth disappear. Steve Carrell seems to play the same character he usually plays, a nerdy sad-ish guy like in Little Miss Sunshine, Dan in Real Life and The 40-Year-Old Virgin. This time he's sad because the end of the world is nearing and his wife has suddenly left him so off he goes on a road trip to find his high school sweetheart bringing along his equally depressed neighbour. Not as darkly funny as I thought it would be. More on the darker and duller side.

The Hitchhiker's Guide to the Galaxy (2005)
In this movie we do see life after Earth was destroyed. Arthur Dent survives the demolition of Earth which was made to make way for a new intergalactic motorway when his best friend, who turns out to be an alien, gets them a ride on a passing spaceship and so begins their trip around the galaxy. Read the book, did not get why it is such a hit. Watched the movie partly to see if I was really missing something and maybe get the book more. Still feel the same way, so I'd say watch it if you really enjoyed the book. I do like Marvin though.

Participating Blogs/Bloggers
Posted by Wanderer at 2:00 AM